Kathmandu: Nepal’s Police is on the hunt for criminal Banka (Saugat Malla) who is based in Belgium but runs his ring in Nepal through Chamero Don (Arpan Thapa). Then Baby (Barsha Siwakoti), Banka’s girlfriend comes to Nepal from Belgium to hack a chip from a corrupt former political leader. She does this successfully with the help from two local hackers. To decode the chip and get money, Baby returns to Belgium with her partners in hacking. Cop Tanka Bahadur Tamang (Dayahang Rai) reaches Belgium on their heels. Lappan Chhappan is the tale of this chase with twists and turns.

Directed by Mukunda Bhatta, Lappan Chhappan is a stylish film — shot in foreign shores and using helicopters and other technologies. The second-half of this chase-and-run film is better than the first half, with lots of twists and turns having been presented in an interesting manner. Bhatta has successfully presented the story like in the style of Bollywood director Abbas Mastan. Sophisticated villains, light comedy, well-written story line are all well executed.

Lappan Chhappan is crowded with A-listers of the present crop of Nepali actors. Rai as Tanka is natural. He has shown different dimension of his acting prowess by performing both as a funny and serious cop. Malla as Banka is commendable. He keeps on surprising the audience be it wearing the mask of a pig and making sounds of a pig, or a muscular don who fights with his opponents and cops. He is perfect. But the scene stealer is Thapa as Chamero Don. Though his screen time is less as compared to Rai and Malla, but every time when he is onscreen, he is excellent. Thapa, as a transgender, has nailed it be it as someone who flirts with men or the fierce villain who kills his enemy without mercy, but can still act innocent and feeble. His innocent expression after a killing is excellent. Siwakoti as Baby is noteworthy. 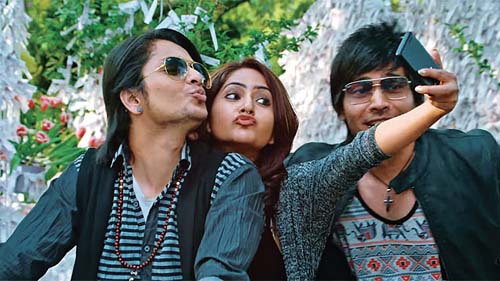 Written by Prakash Jung Shah and Prabesh Paudel, Lappan Chhappan’s USP is its suspense. The film is about crime, money and the chase. But story surprises all with its twists and turns till the end.

The film is visually rich. Cinematographer Purushottam Pradhan’s filming is eye pleasing. The film has been shot in places like Switzerland, France and Nepal, and their beauty is magical. Chandra Panta’s action is just good and Deepak Aaraj’s composition Bish Pani Gayo Mero and Paan Ko Paatma Ke Chha are melodious.