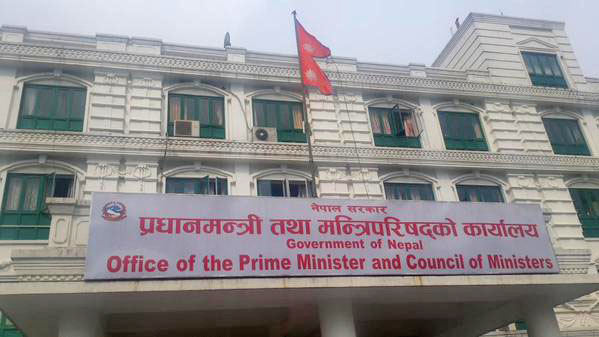 Office of the Prime Minister and Council of Ministers.
KATHMANDU: After induction of 13 ministers from the Nepali Congress party today, the Cabinet strength has reach 31. It includes the Prime Minister, two deputy prime ministers, 24 ministers and four state ministers. As many as four parties have been represented in the coalition government. Prime Minister Pushpa Kamal Dahal's party has 13 members in the government including himself, DPM Krishna Bahadur Mahara, seven ministers and four state ministers. Likewise, the largest coalition member Nepali Congress has 15 members under the leadership of DPM Bimalendra Nidhi, who is the second man in the government. The Rastriya Prajatantra Party and the CPN-United have two and one members respectively in the Cabinet. While taking the oath, PM Dahal had formed a six-member Cabinet on August 4.