Bodies of pilot, co-pilot handed over to kin

Kathmandu, May 28 The bodies of pilot Paras Kumar Rai and co-pilot Srijan Manandhar of Goma Air cargo plane, which crashed in Lukla yesterday killing the two, were handed over to their kin today. The bodies along with injured air hostess Pragya Maharjan, were flown from Lukla to Kathmandu by Air Dynasty helicopter this morning. The bodies were handed over their families after post-mortem at Tribhuvan University Teaching Hospital. 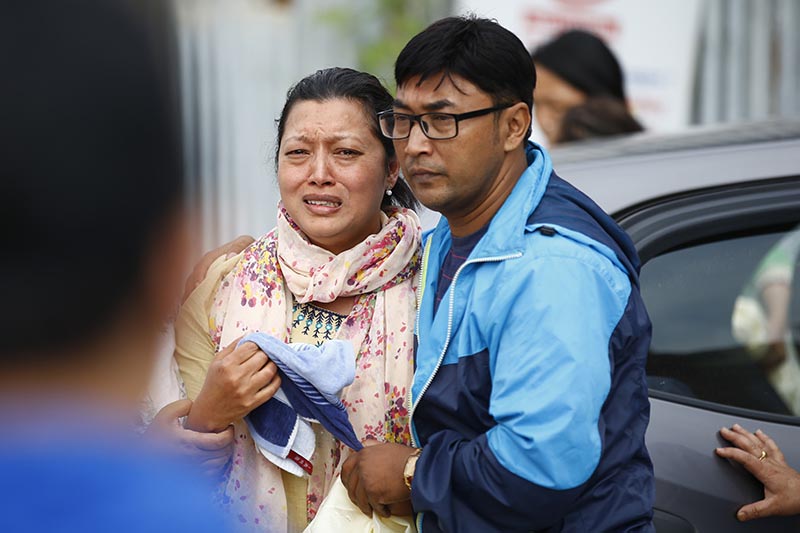 Relatives mourning the death of senior pilot Paras Kumar Rai and co-pilot Srijan Manandhar, who were killed on Saturday when a Summit (Goma) Air plane crashed at Lukla Airport, in Kathmandu, on Sunday, May 28, 2017. Skanda Gautam/THT 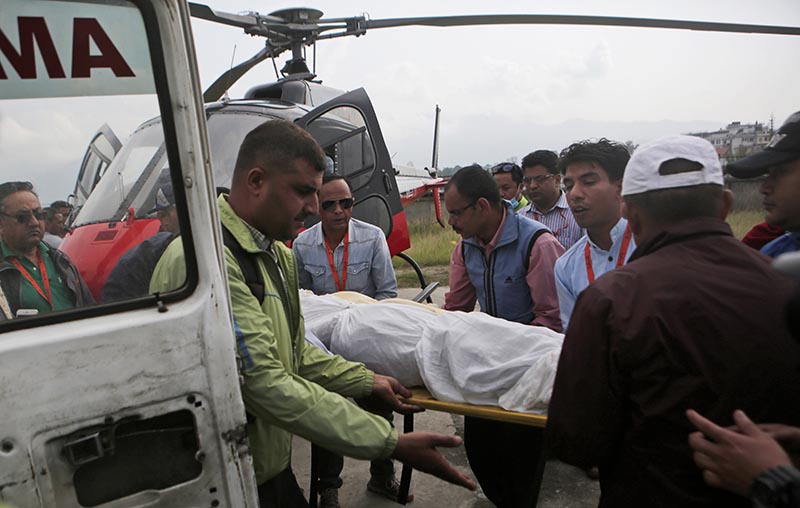 Officials loading bodies of pilots of the Goma Air aircraft, which crashed in Lukla on Saturday, into an ambulance, in Kathmandu, on Sunday, May 28, 2017. Photo: AP
Injured Maharjan was sent to Grande Hospital for treatment. According to Tribhuvan International Airport, the bodies could not be airlifted yesterday due to bad weather conditions. “We succeeded in airlifting the bodies and the injured air hostess to Kathmandu today,” said TIA Spokesperson Prem Nath Thakur. He said a five-member technical team comprising a senior pilot and officials of Civil Aviation Authority of Nepal, among others, flew to Lukla this morning to investigate the crash. “The technical team will observe wreckage and other field evidences, which may help to establish the cause of the accident,” added Thakur. Though the accident took place on Saturday afternoon, bad weather made it difficult to airlift the bodies and injured to Kathmandu. Senior captain Rai, 48, died on the spot while critically injured co-pilot Srijan Manandhar succumbed to injuries nearly eight hours after the Goma Air aircraft belonging to Summit Air crashed while landing in foggy weather at Lukla Airport yesterday afternoon. The cargo plane with three crew members crashed while landing at Tenzing-Hillary Airport in Lukla at 2:05pm, according to Tribhuvan International Airport in Kathmandu. After being rescued from the incident site, co-pilot Manadhar had been rushed to Nicole Niquille Hospital where doctors wanted him to be airlifted to Kathmandu for further treatment. READ ALSO:
You May Also like: