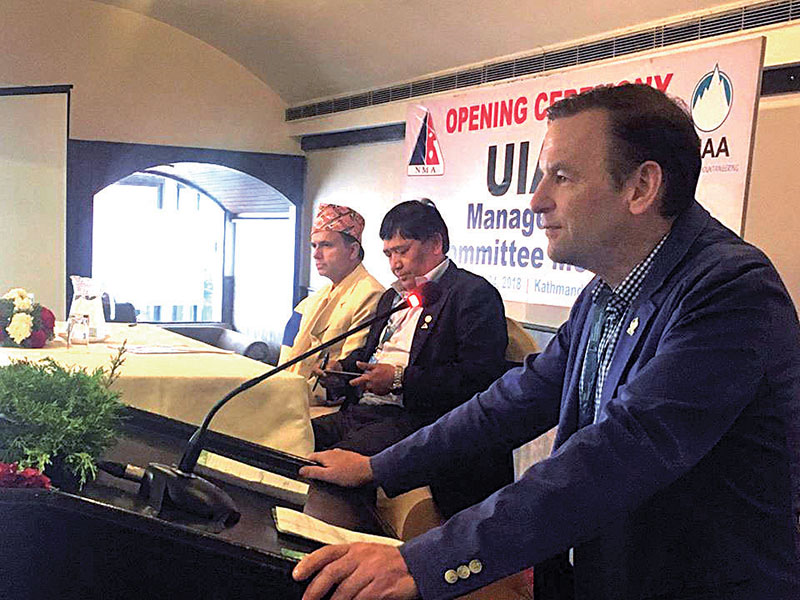 Participants attending the inaugural session of the management committee of UIAA, the World Mountaineering and Climbing Federation, in Kathmandu, on Friday. Photo: THT
Kathmandu, March 23 The leaders of the world’s alpine clubs today highlighted the need to ease the climbing rules in Nepal to promote sustainable mountaineering in the Himalayan nation. Speaking at the inaugural session of the management committee meeting of UIAA, the World Mountaineering and Climbing Federation, UIAA President Frits Vrijlandt stressed on ensuring  safety to maintain sustainability and promote adventure sports in the mountain regions. Being the highest international governing body of all mountaineering, climbing and mountain tourism activities in the world, the UIAA would always cooperate with its members to serve the interest of mountain communities, he said. President of Nepal Mountaineering Association Santa Bir Lama said, “The government must frame mountaineering-friendly policies in consultation with stakeholders,” he added. NMA would always work closely with the UIAA to better promote Nepal’s mountain tourism and protect the mountain environment, he said. Director at the Department of Tourism Ram Prasad Sapkota said Nepal was committed to addressing the concerns and problems in Himalayan mountaineering and environmental protection. “Nepal’s mountain region needs conservation and sustainable development,” he added. Peter Muir of the Alpine Club of Canada, a UIAA management committee member, said the meeting would discuss wide range of issues ranging from new membership to impact of climate change on the mountains. The participants also requested the UIAA to carefully assess local circumstances before passing judgment on appropriate climbing styles. “The members must consider Nepal’s vulnerability to climate change and the threats of glacial lake outburst floods,” they said. The meeting is being attended by more than 27 representatives from 16 countries and Nepali stakeholders. According to UIAA’s sustainability coordinator Gloria Scarano, the team of Mount Everest Biogas Project led by project co-founder Garry Porter won the Mountain Protection Award for 2017. The award is given to MEBP for its efforts in contributing to mountain sustainability. “The award ceremony will be held tomorrow,” she informed. Nepal has already hosted two UIAA meetings in 1982 and 2010, NMA’s first vice-president Deebas Bickram Shah said. The meeting will conclude tomorrow.
#Department of Tourism #Nepal Mountaineering Association #sustainable mountaineering #climbing rules #world's alpine clubs #World Mountaineering and Climbing Federation
You May Also like: