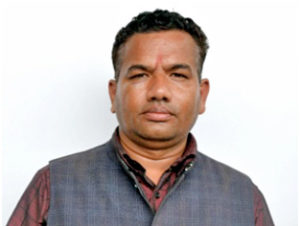 Raju Upreti of Nuwakot was arrested on charge of swindling five persons of fortune. Photo: Nepal Police's MPCD via THT Online
KATHMANDU: A man posed himself as a Nepali Congress leader and bragged connections with the Supreme Court registrar to win confidence of five persons, who were in police detention in a robbery case, only to defraud them, according to Nepal Police's Metropolitan Crime Division (MPCD). The suspect has been identified as Raju Upreti (39) of Thanapati, Nuwakot. He is currently residing at Budhanilakantha. With an assurance to settle their case and help them get out of the Central Jail where they were remanded in custody, the alleged conman swindled the persons of Rs 540,000 combinedly. As he collected Rs 125,000 from Tham Prasad Pun, Rs 345,000 from Krishna Salami and Rs 70,000 from Bikash Rokaya's sister, Upreti disappeared. After they got released from the police custody following due legal procedure, the five sought the MPCD's help to track Upreti. Acting on their complaint, the MPCD said, its team rounded up the alleged swindler from Kalimati of the Capital today. He has been sent to the Metropolitan Police Range for further investigation and action, the MPCD said.
#Kathmandu crime #swindling #fraud case #MPCD #fradulence #robbery case #MPR
You May Also like: