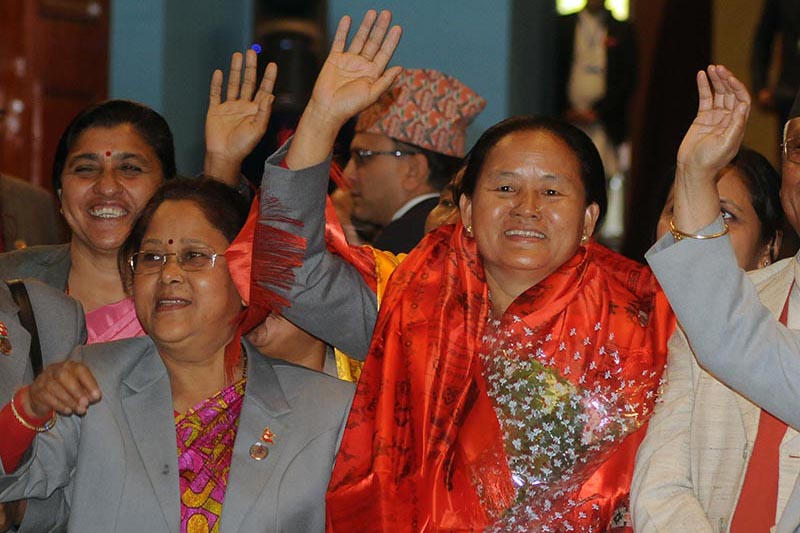 Newly elected Deputy Speaker of the HoR Shiva Maya Tumbahamfe waving to supporters, at the Parliament building, in Kathmandu, on Friday, March 16, 2018. Photo: Balkrishna Thapa Chhetri/THT
KATHMANDU: CPN-UML leader Shiva Maya Tumbahamfe has been elected deputy speaker of the House of Representatives. Tumbahamfe got 201 votes in the election held today in the HOR, which was sufficient to get elected. Her contender Nepali Congress leader Puspa Bhusal got only 61 votes. Speaker Krishna Bahadur Mahara announced the victory of Tumbahamfe. Earlier, Speaker Mahara gave time to proposers and seconders of both candidates to address the House meeting briefly. He also gave time to proposers of both candidates to withdraw their proposals. CPN-Maoist Centre leader Dev Gurung had proposed the nomination of Tumbahamfe while UML leader Rabindra Adhikari seconded it. Likewise, NC leader Dila Sangraula proposed Bhusal’s candidacy, while another NC leader Devendra Raj Kandel seconded it. Tumbahamfe’s victory was certain, as she was a common candidate of the left alliance of the UML and the CPN-Maoist Centre. The two parties have majority in the HoR. Likewise, the Federal Socialist Forum-Nepal, Rastriya Janata Party-Nepal and some independent lawmakers, also cast votes for Tumbahamfe. Meetings of the Federal Parliament (the House of Representatives and the National Assembly) on Friday passed the condolence motion in memory of 51 people killed in the US-Bangla plane crash. Speaker Krishna Bahadur Mahara of the HOR and NA Chairman Ganesh Timilsina proposed the condolence motion in the meetings of their respective Houses, which was unanimously passed. Both Houses observed one minute silence in the meetings in memory of crash victims. Fifty-one people were killed and twenty other passengers injured when A US-Bangla Airlines aircraft en-route to Kathmandu from Dhaka crashed at Tribhuvan International Airport on Monday. Of the 51 deceased, 22 were Nepali, 26 Bangladeshi and one Chinese passenger.

Newly elected Deputy Speaker of the HoR Shiva Maya Tumbahamfe waving to supporters, at the Parliament building, in Kathmandu, on Friday, March 16, 2018. Photo: Balkrishna Thapa Chhetri/THT
Earlier, Prime Minister KP Sharma Oli briefed the both Houses about the incident. The PM expressed condolences and sympathy to the family and relatives of the deceased. The PM said that he had immediately contacted his Bangladeshi counterpart Sheikh Hasina and expressed condolence and sympathy. “I have also committed to her that the government will not compromise on the treatment of the victims,” said the PM. He informed that the government had formed a committee led by former secretary Yagya Prasad Gautam to probe the incident. PM Oli also pledged to implement the suggestions of the probe panel to minimise such horrific incidents. Stating that the government was serious about the identification of the victims, DNA test and laboratory confirmation, the PM said that he told his Bangladeshi counterpart that the two countries could cooperate on those issues. (UPDATED) KATHMANDU: CPN-UML leader Shiva Maya Tumbahamphe has been elected to the post of Deputy Speaker of the House of Representatives, today. Tumbahamphe was appointed to the post of Deputy Speaker by a margin of 143 votes after receiving a majority of 201 votes. Contending against her was Pushpa Bhusal of Nepali Congress, who received a total of 58 votes.
#House of Representatives #Prime Minister KP Sharma Oli #Deputy Speaker #HoR #elected #Shiva Maya Tumbahamphe
You May Also like: