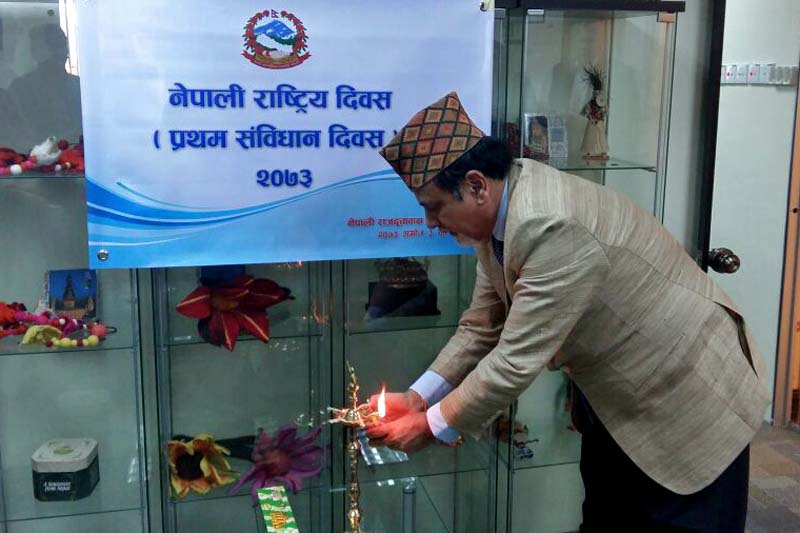 Nepali Ambassador to Malaysia Niranjan Man Singh Basnyat lights a panas to commemorate the Constitution Day, in Kuala Lumpur, on Monday, September 19, 2016. Photo Courtesy: Embassy of Nepal in Kuala Lumpur
KATHMANDU: A Nepali family recently deported from Malaysia has demanded that the government immediately recall its Kuala Lumpur-based Ambassador Niranjan Man Singh Basnyat. Tek Bahadur Gurung and his wife Devi organised a press conference in Kathmandu today and demanded the recall claiming Basnyat deported many Nepalis just because they objected to illegal and unethical moves of him or the embassy. Devi on the occasion shared that the family living and operating a business in Kuala Lumpur was deported in August this year just because they spoke against a financial irregularity of the embassy while outsourcing travel document services of the mission. After Tek Bahadur accused Basnyat of corruption at some social gatherings, the envoy wrote to the Malaysian government requesting deportation, she added. The family then had informed the Malaysian authorities that their business was in compliance with laws of the land, but the authorities, upon pressure from the Ambassador, shut the business on August 25 and deported them to Nepal on September 14, she shared. Malaysian police also held Tek Bahadur and Devi in illegal detention for 14 and 21 days respectively, a statement issued by them read.
#Nepali Diaspora #Nepali Embassy in Malaysia #Nepalis in Malaysia #Niranjan Man Singh Basnyat #deportation #Deported Nepalis #Nepali Embassy in Kuala Lumpur
You May Also like: