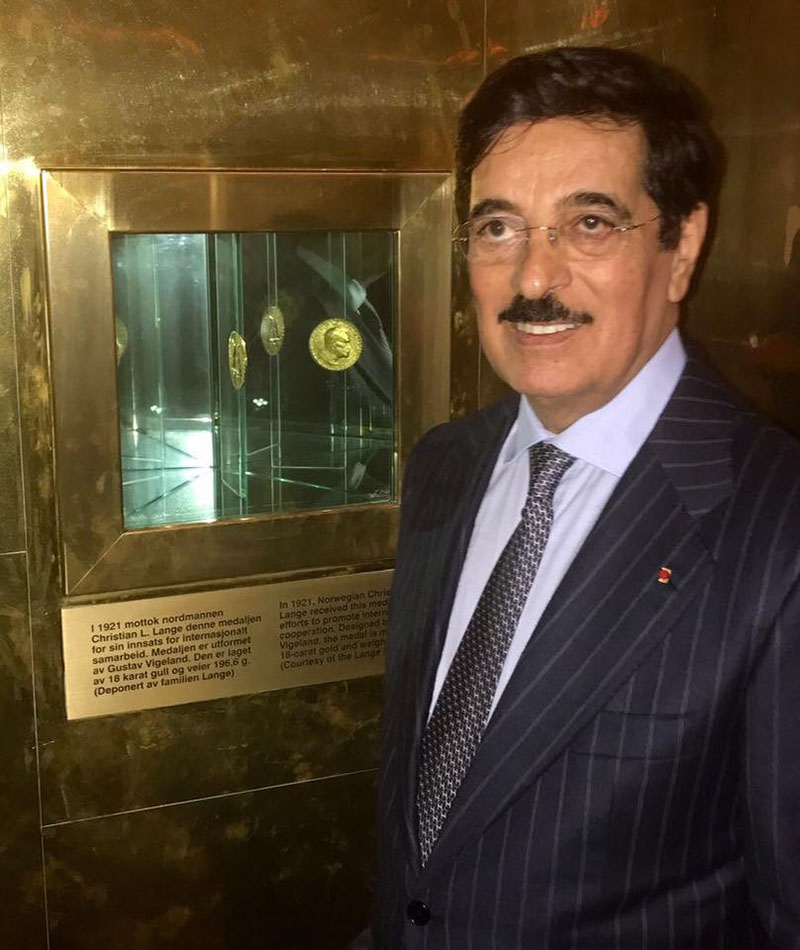 Qatar’s candidate for the post of director general at the United Nations Educational, Scientific and Cultural Organisation Hamad Bin Abdulaziz Al-Kawari, in Kathmandu, on Tuesday, February 21, 2017. Photo: THT
Kathmandu, February 21 Qatar’s candidate for the post of director general at the United Nations Educational, Scientific and Cultural Organisation Hamad Bin Abdulaziz Al-Kawari today said the top priority on his agenda was to find an amicable solution to the financial crisis faced by the UN agency. Talking to this daily, Al-Kawari, 68, currently adviser at the Emiri Diwan, said he had already consulted representatives of the member states about his candidacy to the top post and was felt there was a strong commitment as well as political will to save the organisation across the globe. “My programmes to address the financial problem will certainly be a fresh start for the organisation and that will also help promote the UNESCO’s goals,” he claimed, “There is a need to increase resources and attract financing from various governmental and private sources.” Al-Kawari, who served as Qatar’s ambassador to 10 countries, including France and the United States at different times, said he would try his best to bring the US back on UNESCO board. “US, being a major power in the world, should rejoin the UNESCO to serve humanity,” Al-Kawari, who is also the former minister for culture, arts and heritage of Qatar said, adding all countries needed UNESCO, but UNESCO needed all countries as well. “I will certainly bring more investment to support education and heritage sector,” he said. Stating that Nepal and Qatar shared a distinct relationship, the Qatari diplomat said he would cooperate with Nepal in the fields of education, heritage and science as the country was blessed with a rich cultural heritage. Al-Kawari, who arrived here yesterday, is scheduled to meet president, prime minister and ministers. “My meetings with Nepali dignitaries will mainly focus on strengthening bilateral ties between two nations,” he said. As over 400,000 Nepalis have been working in Qatar, Al-Kawari said, “Let the outsiders say whatever they want (about human rights), but Qatar and Nepal are fully aware of the win-win situation they have been enjoying.”He said education was an essential tool for fighting terrorism, adding education always contributed to overcoming poverty and promoting economic and social growth. The UN is electing the first ever Arab personality to the top of UNESCO that is supposed to be vacant by November 2017. Egypt and Lebanon have also announced their candidates for the director general’s post. “It’s good to have other contenders as the world leaders will get a chance to select one of the best Arab candidates to lead the UN body,” he said, “A diplomat from an Arab country leading this organisation for the first time in its history would be a most precious opportunity to reinforce multilateral cooperation.”
#UNESCO #education #terrorism #financial crisis #United Nations Educational #Scientific and Cultural Organisation #Hamad Bin Abdulaziz Al-Kawari
You May Also like: