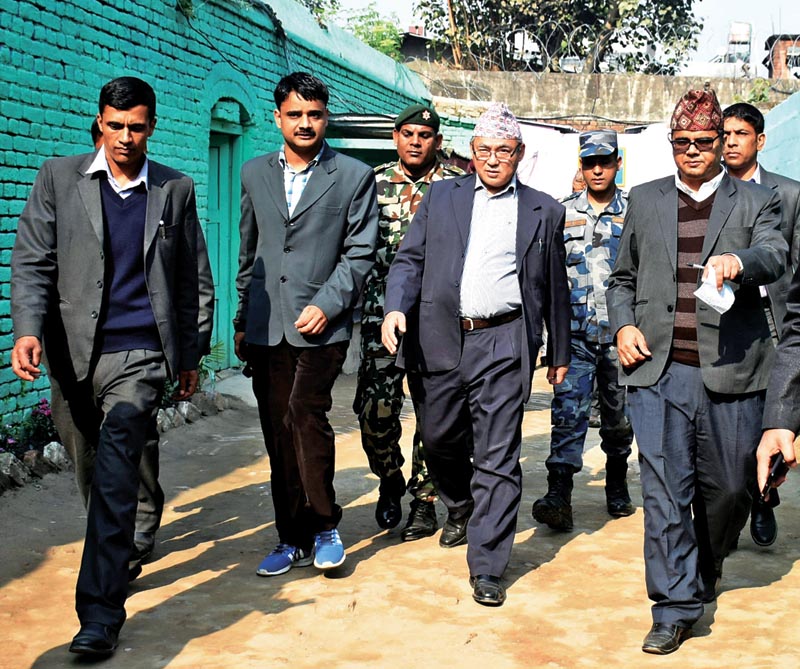 Minister for Home Affairs Ram Bahadur Thapa visiting the Central Jail in Sundhara, Kathmandu, on Tuesday, March 20, 2018. Photo: THT
Kathmandu, March 20 Minister for Home Affairs Ram Bahadur Thapa today visited the Central Jail in Sundhara and Dillibazaar prison and said he was concerned about overcrowding and poor conditions of the facilities. Talking to mediapersons, he said the government would urgently initiate action to transform the prisons into correctional homes. “It seems as if prisons are torture houses and are not equipped with human correction resources. It will take concrete steps for prison reforms,” he informed. Minister Thapa assured that the MoHA, which also oversees the prisons, would work to increase the allowance of inmates and prisoners. During inspection of prison facilities, he also interacted with jailbirds, who demanded that the government increase their allowance, grant amnesty for one time to all prisoners, except those doing time for heinous crimes, ensure speedy adjudication of cases and improve their living conditions.  They said 750 grams of rice and daily allowance of Rs 45 provided by the government was not enough bearing in mind the inflation. The Central Jail and Dillibazaar prison have been housing approximately 2,600 and 580 inmates and prisoners respectively. The number is nearly double their capacity. There has been no progress in transforming prisons into rehabilitation centres in line with the Prison Act, 2019. Most of the prisons are overcrowded. Prison cells are in dilapidated conditions and are awaiting reconstruction or renovation. Meanwhile, Minister Thapa has directed the Department of Prison Management to prepare and submit a prison reform plan within 15 days and a report on the viability of video conferencing of jailbirds, whose cases are sub judice, to the courts no later than seven days. Minister Thapa said the government would attach high priority to upgrade existing amenities of the prisons and guarantee basic human rights, including sanitation, room space, quality food and regular health check-ups. Some 19,000 people are living in 74 prisons with capacity of around 11,000 persons. Many prisons lack space for jailbirds to sleep peacefully. Jailbirds have also been denied sports and entertainment material, skill training  and adequate textbooks for formal education. The country has 74 prisons in 72 of 75 districts. Bhaktapur, Bara and Dhanusha do not have any prison, while Kathmandu and Dang have two prisons each. As part of prison reform, the government has acquired around 535 ropanis of land in Banke district for the construction of open prison with capacity of over 5,000 persons.
#Central Jail #MOHA #Sundhara #Minister for Home Affairs #Ram Bahadur Thapa #Dillibazaar #prison conditions #Prison Act
You May Also like: