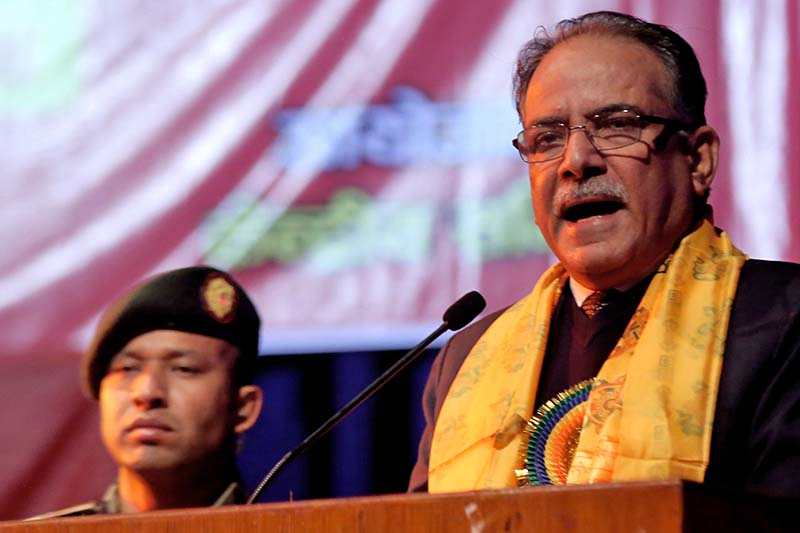 FILE: CPN Maoist Centre Chairman and Prime Minister Pushpa Kamal Dahal speaks at a training programme organised by the All Nepal National Independent Students Union-Revolutionary, in Kathmandu on Wednesday, November 9, 2016. Photo: RSS
KATHMANDU: Prime Minister Pushpa Kamal Dahal said the government was preparing to announce local poll dates after taking all political parties into confidence. Addressing the Politburo meeting of his CPN Maoist Centre party in Kathmandu today, the Maoist leader said the government was in constant communications with opposition parties including the Madhes-based ones for the same. He was also hopeful that the Constitution amendment bill, recently registered at the Parliament, would be endorsed in consensus. He said the government was holding talks with the parties to ensure the same. Earlier, the Central Office meeting of the party had decided that local polls were a must for the Constitution implmentation, the Rastriya Samachar Samiti quoted the party spokesperson Pampha Bhusal as saying. Meanwhile, Dahal briefed the party meeting about contemporary political issues. The Politburo members would air their views over the issues from Sunday, according to the PM's Secretariat.
#local polls #Pushpa Kamal Dahal #CPN Maoist Centre #CPN Maoist Centre Politburo #local poll dates
You May Also like: