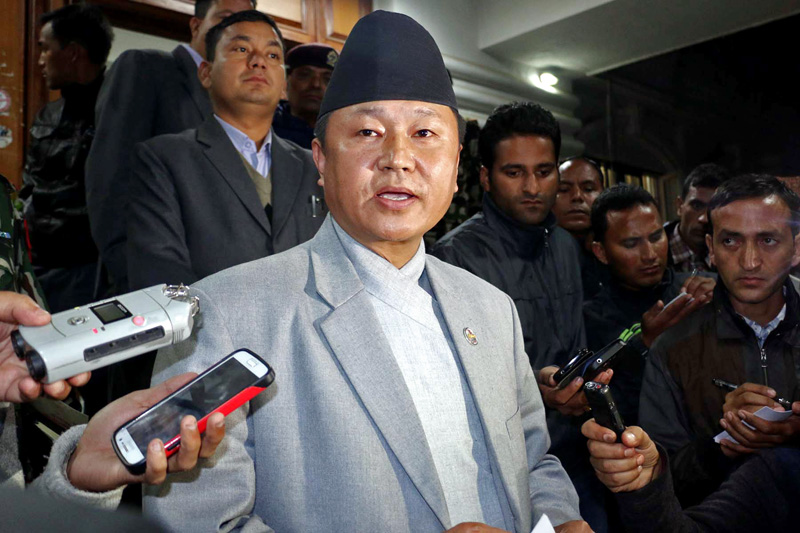 Minister for Information and Communication, Sherdhan Rai briefing the Cabinet decision held today's evening at Singha Durbar, to the journalist in Kathmandu on Tuesday, November 24, 2015.. Photo: RSS
KATHMANDU: The government spokesperson Sherdhan Rai on Saturday commented that some international organisations were expressing 'inappropriate' concerns over Nepal's internal affairs of late. The Minister for Information and Communications was referring to a latest report by the United States Department of State published recently. The report had claimed that Nepal's human rights situation had not been encouraging in 2015 and had listed shortcomings of the government in ensuring rights of its citizens. Rai was speaking with journalists at the Reporters' Club in Kathmandu today. "It is not appropriate to comment that there is scarcity and insecurity in Nepal or human rights are violated here, going against the objective reality," he said, "The government refutes comments expressed with wrong intents." "There is no any violence or conflict in Nepal," he clarified, "Nepal is preparing for implementation of the Constitution, post-earthquake reconstruction and new budget, policies and programmes. We are implementing federalism." "In this situation, no such comment is appropriate." He, however, maintained, "We want to have friendly relationship with all; we want to prosper with everyone's good wish and support." Meanwhile, the Minister claimed that the government was at the last stage of preparations to announce a date for the local polls.
#Nepal human rights #Sherdhan Rai #US Department of State #human rights situation
You May Also like: