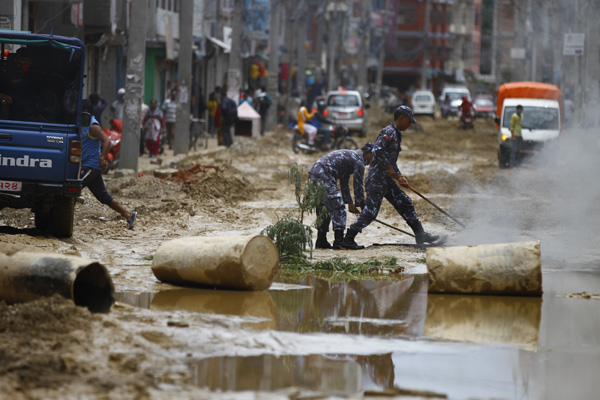 Security personnel douse a fire set by locals while staging a street protest, demanding immediate construction of the Old Baneshwor-Sinamangal road section, in Kathmandu, on Friday, July 10, 2015. Locals complain that they have been facing a hard time, as the road section, dug about three years ago, is yet to be be constructed. Photo: THT
KATHMANDU: The government once again directed concerned authorities to complete Sinamangal-Ratnapark road renovation of the Capital at the earliest. Secretary at the Office of the Prime Minister and Council of Ministers (OPMCM) Shantaraj Subedi on Wednesday directed the Department of Roads, the Kathmandu Valley Road Improvement Project and the Melamchi Water Supply Project to complete the renovation tasks along the Sinamangal-Bhimsengola-Maitidevi-Dillibazaar-Ratnapark road. Subedi had organised a meeting among concerned officials to discuss public's complaints about the road, the OPMCM said in a statement today. The Secretary urged the authorities to take actions against contractors and staff if they were found responsible in delaying the project. Subedi said the delay seen in the project exemplified extreme negligence and irresponsibility on parts of the government agencies. He also directed the officials to complete expansion of other road sections in the Capital at the earliest.
#OPMCM #Office of the Prime Minister and Council of Ministers #Kathmandu roads #Old Baneshwor-Sinamangal road section #Road expansion #Roadrenovation #Shantaraj Subedi
You May Also like: