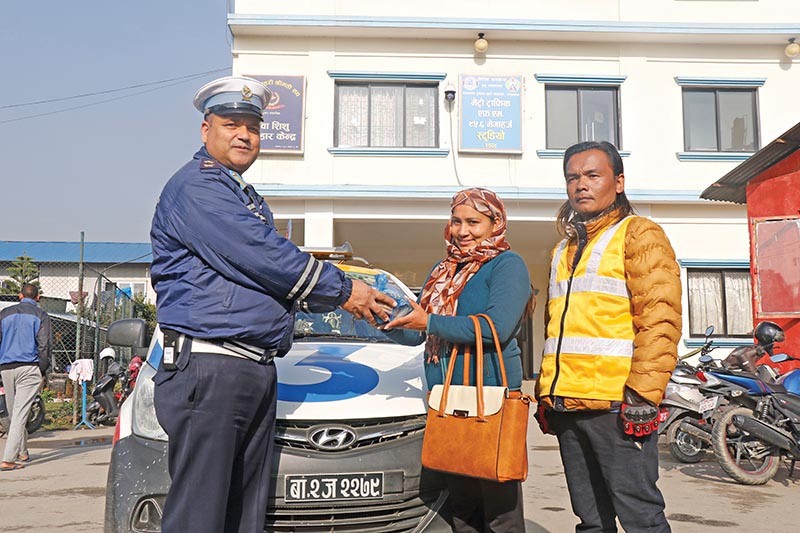 A traffic policeman handing over valuables returned by a taxi driver to the owner, in Kathmandu, on Wednesday, February 20, 2019. Photo: THT
Kathmandu, February 20 A taxi driver has proven that honesty counts more than needs. Simal Rai, 38, a cabbie, submitted a bag containing gold ornaments worth around Rs 350,000 to the MTPD today after a woman passenger inadvertently left them in his taxi. Rai, who hails from Dharan, Sunsari, resides in Bhimsengola, Kathmandu. Basanta Bhusal, 28, of Bajhkateri-3, Gulmi, hired the taxi at around 4:30 am for her journey from Anamnagar to Naikap. After Rai dropped Basanta in Naikap and returned to Kalanki, he found the bag in the back seat of the cab before picking up passengers. He searched the bag and found gold ornaments and cash. He kept the valuables intact and approached the MTPD to submit the bag to traffic police personnel at around 6:30 am. DSP Krishna Datta Bhatta said traffic police handed over the bag to Soniya Bhusal, younger sister of Basanta, in the presence of Rai at around 8:30 after identification and verification of the concerned owner. There were eight items of gold ornaments and Rs 6,123 and a ladies purse. Police appreciated the taxi driver’s honesty. Earlier too, Rai had submitted to MPTD a mobile phone left by a passenger in his vehicle. Most of the cabbies in Kathmandu Valley are known for operating taxis without the mandatory seal on fare-meter, refusal to provide short distance service, tampering with and using defunct meter, and bargaining over fare with passengers. Statistics released by Metropolitan Traffic Police substantiate that they are involved in unfair practices. In the fiscals 2016-17 and 2017-18, 4,518 and 8,120 taxis were booked for various offences respectively. Many of the cabs were repeat offenders. Around 10,000 taxis are in operation in the valley.
#honesty #Traffic Policeman #Valuables left in taxi #Honest taxi driver #Honest cabbie
You May Also like: