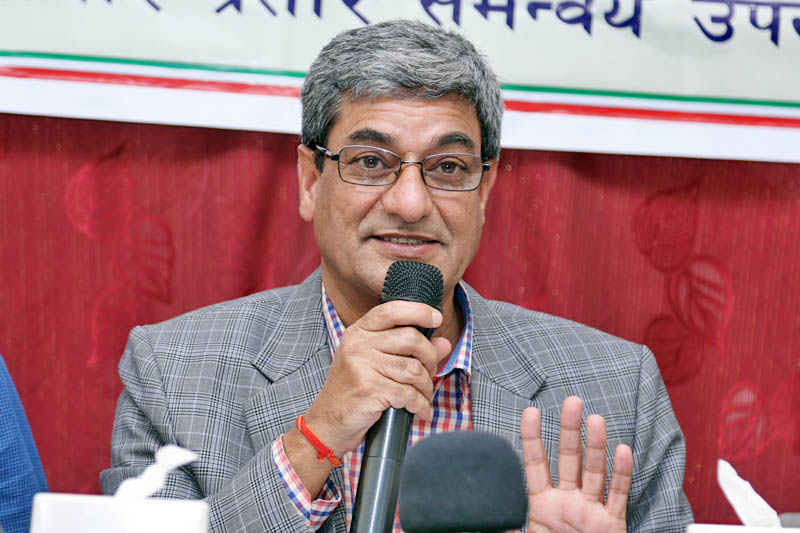 Minister for Physical Infrastructure and Transport Management Ramesh Lekhak speaks during a press meet organised by Nepali Congress at Sanepa in Kathmandu, on Wednesday, May 3, 2017. Photo: RSS
Kathmandu, May 8 Nepali Congress leader Ramesh Lekhak today said his party will seek a conclusion to the impeachment motion filed against Chief Justice Sushila Karki. Lekhak, who heads the party’s local polls publicity sub-committee, said so while speaking at a press conference organised by his party. He added that the Nepali Congress was currently focusing on the local-level polls, and would seek a conclusion on the impeachment motion after elections. He said dialogue would be held on the motion as per the constitution. “We feel that the Supreme Court’s recent order has infringed the jurisdiction of the Executive and the Parliament,” he said adding, “The impeachment motion was brought to make the judiciary independent, impartial and a respected body.” Lekhak said rule of law could be ensured only when all three organs of the state — Judiciary, Executive and the Legislature — worked within the confines of their boundaries. The ruling Nepali Congress today said results of the first phase of elections scheduled for May 14 would be in the party’s favour. Addressing a press meet organised at the party’s central office in Sanepa, Lalitpur, Coordinator of Nepali Congress central publicity sub-committee Ramesh Lekhak claimed that the NC was ahead in the polls campaign. He claimed that his party leaders and cadres were working in unison to achieve victory in the upcoming polls. Informing that the NC, for the first time, had deployed its central members to coordinate the party’s sister wings in districts, regions, municipalities and rural municipalities, Lekhak said the party’s decision to deploy central members had encouraged party workers and supporters. He further claimed that the NC’s decision to align with other parties in the local level polls was not problematic. “We do not have any problem in the areas that we have aligned,” said Lekhak. He claimed that the NC’s position was better in the local bodies where it had aligned with the CPN-Maoist Centre. Lekhak, on behalf of the NC, also condemned the incidents of arson on vehicles used by NC cadres for poll campaigns in some districts. READ ALSO:
#Ramesh Lekhak #civic polls #Nepali Congress leader #Impeachment motion #impeachment motion filed against Chief Justice Sushila Karki
You May Also like: