India says cross-border obstacle due to unrest on Nepali side 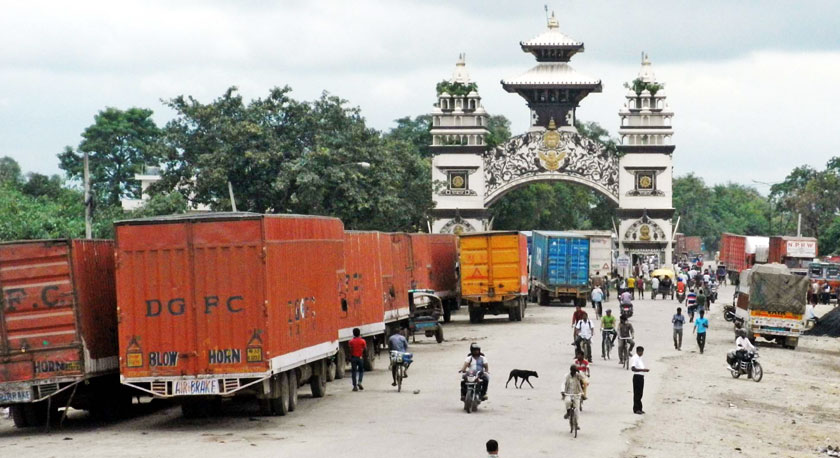 Carriers are seen queuing up at the Nepal-India border entry point at Raxaul on Tuesday, September 22, 2015. Photo: RSS
KATHMANDU: India said that the obstructions recently seen at various entry-exit points at the India-Nepal border was because of unrest, protests and demonstrations on the Nepali side. Issuing a statement, in response to a query from the media, Spokesperson at the Ministry of Foreign Affairs of India said,"The reported obstructions are due to unrest, protests and demonstrations on the Nepalese side, by sections of their population." Hundreds of freight carrier trucks and fuel tankers have been stopped on the Indian side, reportedly due to security concerns in Nepal. The agitating Madhesi parties have intensified their protests in the border entry points with an intention to effect an embargo and pile pressure on the government to meet their demands regarding the constitutional amendments. The statement further said that due to the prevailing unrest on the Nepali side, the Indian freight forwarders and transporters had voiced complaints about the difficulties they are facing in movement within Nepal and their security fears. Reiterating that the current issues in Nepal are political in nature, the statement urged the leadership in Nepal to resolve the issues at the earliest by addressing the causes underlying the present state of confrontation credibly and effectively. "We do hope that the situation will ease at the earliest," the statement said. Meanwhile, the Ambassador of India to Nepal, Ranjit Rae is holding a press briefing at the Indian Embassy premises at 5 pm today, according to the official Twitter of the Indian Embassy in Kathmandu. UPDATE: The press briefing was postponed.
#India #Nepal #Madhesi parties #Nepal politics #Nepal-India border #Tarai #Madhesh protests #Madhesh protest #Nepal's constitution #embargo #Nepal-India #India's Ministry of External Affairs #cross border obstacle #unrest #Nepal supplies #Border blockade
You May Also like: