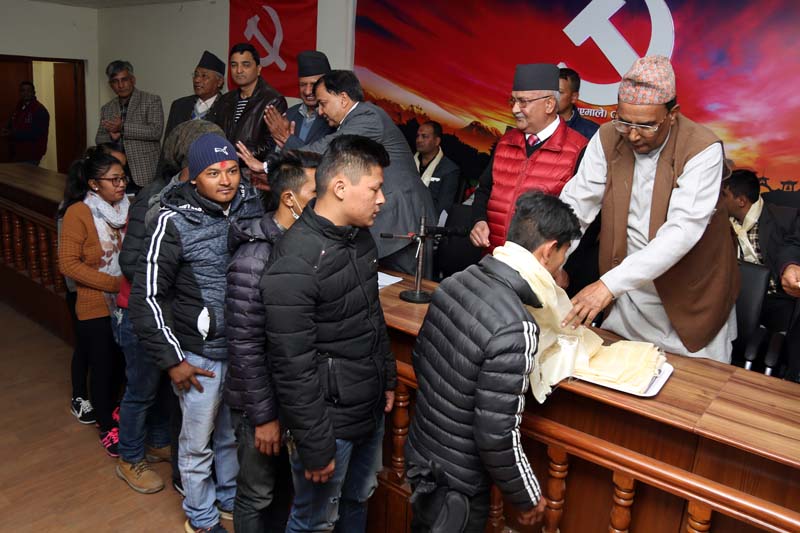 CPN-UML Chairman KP Sharma Oli among other leaders welcomes leaders and cadres of various parties after they defected to the main opposition, in Dhumbarahi of Kathmandu on Thursday, December 8, 2016. Photo: RSS
KATHMANDU: CPN-UML Chairman KP Sharma Oli on Thursday demanded that the government immediately announce the date for local elections at the earliest. Welcoming some leaders and cadres, who defected from various parties to the UML, at the party central office in Dhumbarahi today, Oli said the announcement was a must to end the transition. He added that successful completion of elections at local, provincial and federal levels would only end the transition. Meanwhile, he flayed the government for prioritising Constitution amendment instead of Constitution implementation. "The government is doing what it should not have done and is not doing what it should have," he said. The main opposition leader commented that the incumbent Prime Minister Pushpa Kamal Dahal was not for promotion of identity. On the occasion, the former Prime Minister had welcomed 92 leaders and cadres of various parties into the UML as they defected from their previous parties.
#CPN-UML #KP Sharma Oli #local polls #Pushpa Kamal Dahal #constitution amendment #constitution implementation
You May Also like: