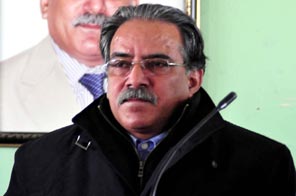 KATHMANDU: The Standing Committee (SC) meeting of the UCPN-Maoist has been extended for a fourth day at the party headquarters in Paris Danda in Koteshwor on Friday.

According to Maoist spokesman Dinanath Sharma, the meet was extended due to a lack of time for the SC members’ comments on the political document presented by its chairman Pushpa Kamal Dahal, which covers various topics like the movement for national independence, civilian supremacy, the high-level political mechanism, the future organisational structure of the party and the party's plenum meeting to be held in mid-February.
The Maoist SC meeting began on Wednesday.

#Dahal to tackle queries in 3rd day of Maoist SC meet
You May Also like: