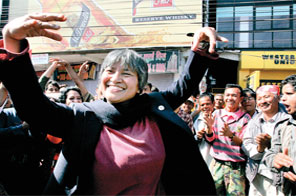 Maoist leader Hisila Yami rejoicing along with party cadres during the padlocking of KMC Office in Sundhara on Monday. Source: THT

KATHMANDU: On the second day of the two-week long protest programmes announced by the main opposition UCPN-Maoist, its cadres picketed all the municipalities and VDCs across the country from 8 am till 5 pm today.
Except for sporadic scuffles at a few places, the protest programme remained peaceful.
The Maoists picketed the office of Kathmandu Metropolitan City (KMC) in Sundhara in the capital since 8 am.
The traffic movement went haywire throughout the day. Central Committee member and Kathmandu District committee in-charge Pawan Man Shrestha had addressed the agitation. All the wards of the KMC remained closed today.
While all ward offices of Kirtipur Municipality were closed, Bhaktapur witnessed a scuffle which had ensued after policemen attempted to let the employees enter the municipality at around 11 am. One agitator and a policeman were injured in the incident.
In Lalitpur too, the Maoists picketed the office of the Lalitpur Sub-Metropolitan City.

KATHMANDU: Four top Maoist leaders held an informal meeting and discussed as to how they could declare the "autonomous republican states" as part of their protest plan.Chairman Prachanda, vice-chairman Mohan Baidhya 'Kiran', general secretary Ram Bahadur Thapa 'Badal' and standing committee member Krishna Bahadur Mahara were those involved in the discussion at the party office in the afternoon.
Baidhya said the party would soon decide to deploy leaders at different places for the declaration scheduled for November 9. He, however, said that declaration was only symbolic and for publicity. He said it was for the sake of agitation. — HNS

#Maoists disruption at local bodies
You May Also like: