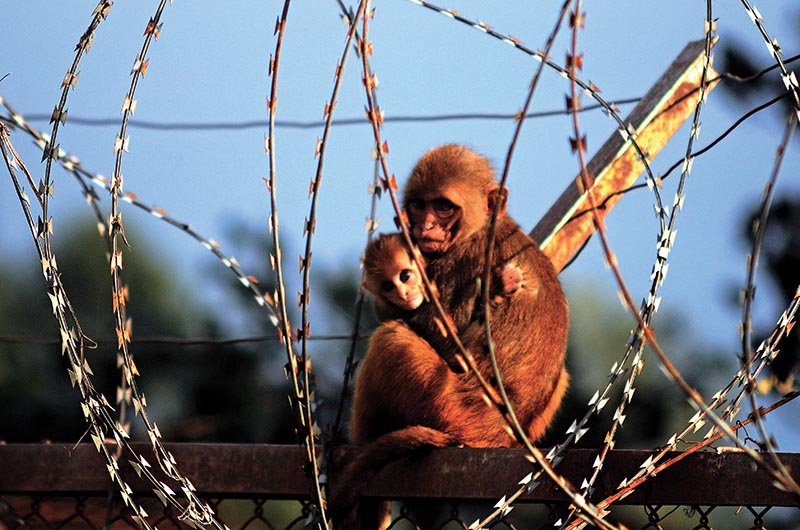 Monkey carries baby while sitting on a fence protected with razor wire, in Kathmandu, on Friday, September 15, 2017. Photo: Balkrishna Thapa Chhetri/THT
Kathmandu, September 15 Frustrated by troubles constantly created by marauding monkeys, Budhanilakantha School has filed a complaint at the District Forest Office, Kathmandu this month. Another similar complaint was registered at the office by Om Hospital in Chabahil a few days ago.These two are not the only cases. The DFO Kathmandu has been receiving a flurry of such complaints for long now. According to District Forest Officer Indra Prasad Sapkota, complaints about the persisting monkey menace have dominated other complaints regarding problems created by other wild animals, throughout this year. “We have been receiving four to five complaints by locals regarding troubles created by monkeys every week. Previously, most people used to come to us with complaints of wild boar menace,” Sapkota told The Himalayan Times. He further said, “Monkey-related complaints frequently come from Budhanilakantha, Pashupati and Swoyambhu, whereas wild boar-related complaints, two to three in number every week, used to be registered by locals from areas on the outskirts of the city like Sakhu.” The government has excluded monkeys from the list of wildlife predators. Despite monkey-related complaints dominating grievances of locals about troubles created by wild animals across the country, the government has failed to manage due compensation for the damage caused by monkeys. The Relief Assistance Directory under the government has enlisted 14 wild animals as predators and compensation is provided only in cases in which damage or losses are caused by those animals. The list includes elephant, rhinoceros, tiger, bear, leopard, snow leopard, wild boar, clouded leopard, wolf, wild dog, water buffalo, crocodile, Gaur bison and python, as per the directory. According to Ministry of Forest and Soil Conservation, since the case related to monkeys is under the review at the apex court, monkey was excluded at the last moment when the directory was last amended. “The issue of monkey was a matter of discussion while amending the directory but since the case was registered at the court and no parameters for compensation to damage or losses caused by monkeys were set, monkey was excluded from the list,” said Joint Secretary Maheshwor Dhakal at the ministry. The newly amended directory has doubled the compensation amount for human and property damage caused by such 14 species of wild animals. Now family of a person killed in wildlife attack will get a sum of Rs 1 million which was just Rs 500,000 earlier. Similarly, compensation for the injured was doubled from Rs 100,000 to Rs 200,000. Up to Rs 30,000 has been provisioned for crop depredation.
#Kathmandu #District Forest Office #Budhanilakantha School #Monkey menace
You May Also like: