Monsoon withdrawal likely to be delayed 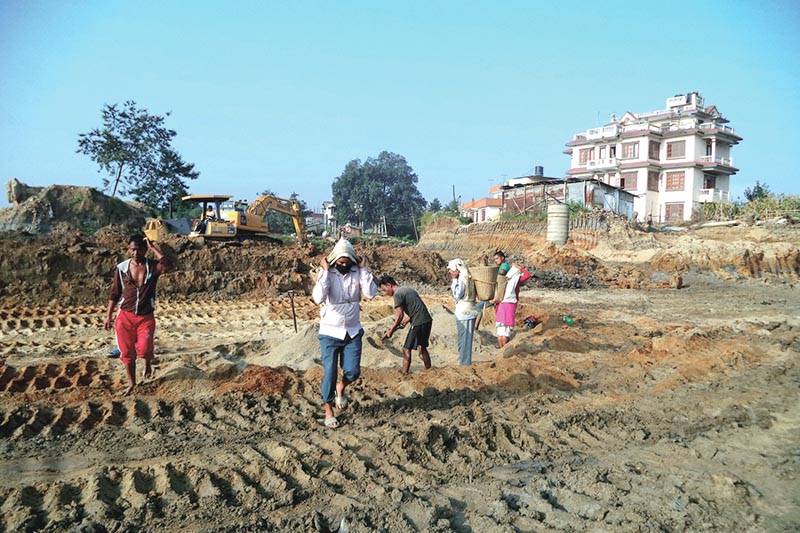 A farmland being levelled for sale in Kageshwori Manohara Municipality, Kathmandu, on Sunday, September 10, 2017. Photo: THT
Kathmandu, September 10 The monsoon this year is likely to retreat two weeks later than its usual withdrawal date of September 23, according to Department of Hydrology and Meteorology. The department said there is no sign of monsoon withdrawal so far. Westerly wind must replace the easterly wind for monsoon to withdraw from the country. Director General at DoHM Rishi Ram Sharma said the easterly wind would continue at least till the end of this month. “It can be said that this year’s monsoon will retreat in October,” Sharma added Though the usual monsoon withdrawal date is still 13 days away, the country has already received 120 per cent monsoon rainfall so far. According to DHM data, mean rainfall of the country has been recorded at 1,800 mm whereas normal rainfall till date is 1,200 mm. The country received a total rainfall of 2,100 mm so far. “Stations across the country recorded above normal rainfall this year,” said DG Sharma, adding, “Heavy rainfall triggered floods in most parts of the Tarai. Likewise, mid and western hilly areas recorded heavy rainfall. Only a few stations recorded below normal rainfall.” This year monsoon entered Nepal on June 12 after a delay of two days. The normal monsoon arrival date for Nepal is June 10. Last year, monsoon that entered Nepal on June 15 had withdrawn on October 12. According to DoHM, it was the fourth delayed monsoon last year. Apart from this year, 2013 saw the largest deviation from the set monsoon withdrawal period, ending that year on October 19 instead of September 23. Meanwhile, Meteorological Forecasting Division predicted temporary rainfall and mostly clear day across the country for the next three days. Meteorologist at the MFD Suvash Rimal said only temporary rainfall might occur in some places as monsoon was currently inactive.
#Monsoon #Department of Hydrology and Meteorology #Kathmandu weather
You May Also like: