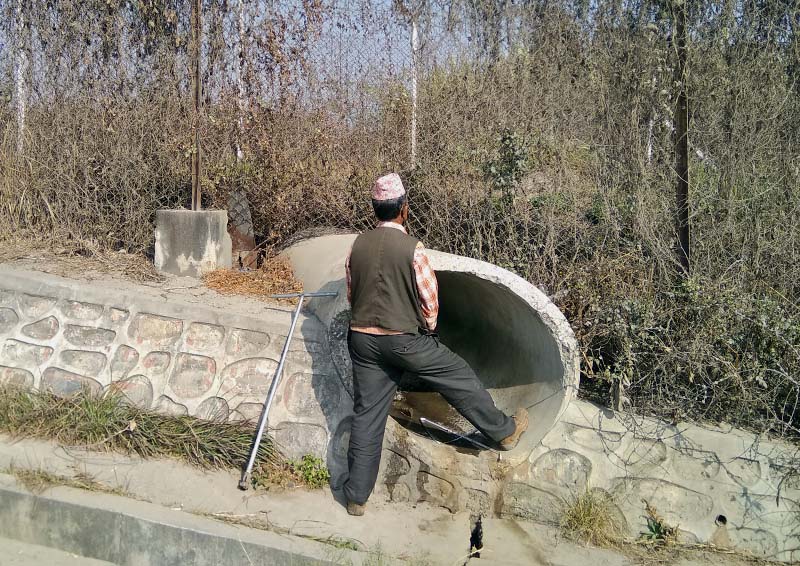 A man relieves himself in open at koteshwor. Photo: THT
Kathmandu When nature calls, you gotta answer, right? Does not matter even if it means relieving yourself in full view of other people, not caring how your act is affecting others. Cause, you know, you can’t hold it! That seems to be the guiding thought for many of us. Yes, people relieving themselves (peeing) on roadsides is not a welcome but common sight in our cities. This could probably be because there is a lack of public toilets, more importantly clean usable ones, for us to use. And it could also mean that we lack common decency and are shameless.

A man relieves himself in open at koteshwor. Photo: THT
What is ironical is that it is the passersby who are more embarrassed seeing someone relieve themselves in the open than the one who is doing the act! They (the passersby) say that they either ignore the reliever or go another way. And it becomes more embarrassing for them if they are walking with their family or friends. “I feel bad when I see people relieving themselves in the open. No one wants to see something like that. It becomes more embarrassing when I am walking with my father. We try to ignore what is going on there in front of us and look elsewhere in silence,” shared 14-year-old Kabina Acharya, a resident of Imadol. For Sushil Bhattarai and Rozan Basnet, Class IX students, people peeing on roadsides is a common sight. “We see that each day. We usually ignore it,” they said, but added, “One day we got an idea. We wanted to do something about it. So, when we saw a man peeing in the open, we clapped and laughed at his act. He immediately zipped his chain and ran away.” And Basnet added, “I usually feel very embarrassed when I am walking with my sister. If I see someone peeing when I am with her, I distract her saying, ‘Look over there. Can you see that?’” It seems some areas are designated peeing spaces. You know it is so because of the pungent smell emanating. Sometimes there is so much overflow “it is difficult to pass such areas as you might just step on it. It feels bad,” shared Pravesh Satyal, 24, a freelance researcher from Koteshwor. “As a man, seeing another man peeing on the roadside makes me feel uneasy. If I am with my female friends and relatives, it is comparatively more embarrassing. I have felt my female companions’ uneasiness in such a situation. I walk silently when they are with me,” he added.

A man relieves himself in open at koteshwor. Photo: THT
The usual thing that a person does when nature calls is look for a restroom either public, mobile, in a restaurant or shopping mall, or as a last resort — someone’s house. Ours is a city that is littered with eateries, and eateries do translate to ‘usable restrooms’. So, finding one should not be so difficult, right? “For men, it is usually difficult. People generally say, ‘Go somewhere else,’ if we go to their house. Restaurant owners too at times do not let us use their toilet. We look for all possible alternatives, and when there is nothing available and at the same time we are unable to hold it any longer, we resort to ‘open relief’. I also do it when there are no other options left, “ Satyal informed. Though “I usually look for places where there is no mobility of people and in areas where I can hide myself”. “When I am travelling, I usually do it in the open as drivers stop the bus in such areas. When everyone else is doing it, I don’t feel awkward because every passenger is doing the same, plus we have no option on the highways,” shared Anit Pandey, a resident of Swoyambhu.

Much, much more than that

In addition to seeing men (in most cases it is men who indulge in this ‘public relief’ act) peeing in the open, many women also face the unpleasant experience of being eve teased with men flashing their privates at them. Sometimes foul words are also used. “I have faced such situations often. I feel like I have been harassed. I feel very bad. I haven’t ever complained about this. At times I fear being raped or that they will do something wrong to me,” shared Upashana Shrestha, a resident of Pepsicola. Peeing in the open, using foul language, flashing someone are offensive acts. “There are laws. The perpetrator will be punished if s/he is proven guilty,” informed advocate Ratna Kumar Kharel, Member of Nepal Bar Association, Ramshahpath. “If any act has a negative effect on people or society, then it is considered as a crime. A Chief District Officer is provided rights to take immediate action against such public crime,” he added. “If anyone wants to make complaint of such harassments, then s/he can go to the nearest police office with supporting evidence,” Kharel suggested. And the police personnel are also aware about such activities. The Metropolitan Police Station, New Baneshwor had started a campaign to bring in people who relieve themselves in the open around the Bagmati River. “We wanted to make people aware about the cleanliness of the surroundings. Peeing in open spaces is an offence. We started the campaign as part of the Bagmati Cleaning Campaign. We stopped it recently as we feel people have stopped peeing in the open in the area,” said one of the officials who wanted to remain anonymous.

A man relieves himself in open at koteshwor. Photo: THT

Regular urination is needed for a healthy body. “It should be individualised. A normal person can hold urine for two hours. Some can hold it for three to four hours. If you are young, then you can hold it for longer. But if you are old, and conscious, then there are chances you will pee involuntarily. This usually happens when someone suffers from a prostate disease or problems with the bladder,” informed Dr Uttam  Kumar Sharma, Professor of Urology and Kidney Transplant Surgeon, Tribhuvan University Teaching Hospital, Maharajgunj. But he added, “People can suffer from urine retention — inability to completely empty the bladder when urine is held for long time.” According to Dr Sharma, “The capacity to hold urine is comparatively more in males than females as males have a longer urethra than females.” But looking at the roadside offenders, this seems to be the opposite. “There is a mechanism for urination. Even if you have the urge to urinate, the brain gives a signal whether the place is okay to urinate. If not, then your urge to urinate goes away,” he added.

A man relieves himself in open at koteshwor. Photo: THT
Mobile toilets have been set up for people’s convenience. The Kathmandu Metropolitan City Office (KMC) has set up public toilets in areas where there is more mobility of people. There are 16 such toilets with bathroom facilities in four of them. Three of them are in the Ratnapark-Tundikhel road section, while one is in Koteshwor. Many public toilets are in areas with overhead bridges. One is being constructed in Chabahil, as per Gyanendra Karki, Director of KMC. However, this is not enough and people have complained about insufficient public toilets. “This is because we lack space. We are looking at constructing public toilets in 41 places in Kathmandu,” Karki added. Public toilets are needed, and more in areas where mobility of people is more. But the problem lies in the fact that where there is more mobility of people, there is a lack of space. “We are trying our best,” added Karki. But people still pee in the open when the urge to answer nature’s call becomes unbearable and there is no restroom facility in sight. And even otherwise. People are seen relieving themselves any where — against a wall, a tree, a quiet corner, more like — oh let me just pee! “It looks like people are very shameless,” Karki opined.
#public toilets #Tribhuvan University Teaching Hospital #Kathmandu Metropolitan City Office #peeing on roadsides #nature calls #Urology #Kidney Transplant Surgeon
You May Also like: