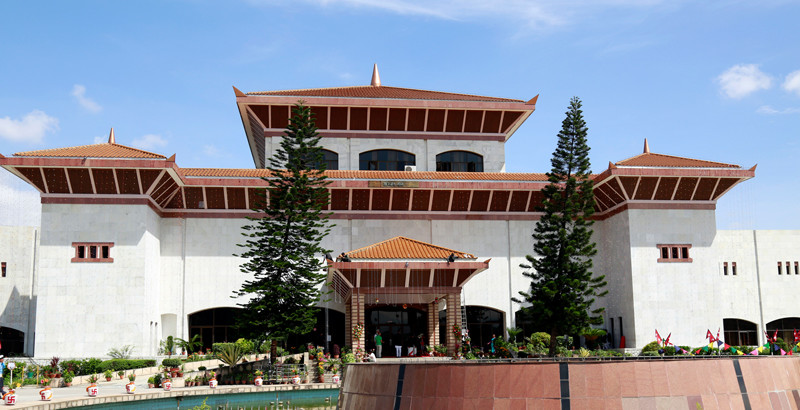 Parliament building on Sunday, September 20, 2015. Photo: RSS
KATHMANDU: The main opposition Nepali Congress has urged the government to call the meeting of the Legislature-Parliament at the earliest. The party said it would provide full cooperation for issuing the Parliament Regulations as per the new Constitution. A joint meeting of the NC's Central Working Committee members available in the Kathmandu valley and its Parliamentary Party held at the Legislature-Parliament building in Naya Baneshwar today accused the government of negligence in convening the Parliament meeting. NC leader Dilendra Prasad Badu said the meeting demanded that the government take initiatives to call the Parliament meeting promptly, citing the government was showing sheer negligence when it was required to present the bills of the required acts and laws in the Parliament paving the way for the implementation of Constitution and holding discussions on them. This is the first meeting of the NC Parliamentary Party after the party President Sher Bahadur Deuba's election to the post of the PP leader with landslide votes. Senior leader of the party Ram Chandra Paudel presided over the meeting today as the party President Deuba left for India earlier. At the outset of the meeting, senior leader Paudel highlighted the latest political scenario and the NC's role in implementing the Constitution. Badu alleged that the government failed to check black marketing, adding it was unable to work for welfare of the people. The government and the National Reconstruction Authority were only giving assurances of constructing houses for the earthquake survivors, the NC leader charged. CWC member Prakash Sharan Mahat said the meeting also held discussions for taking initiatives for making the democratic panel victorious in the election of the authorised trade unions scheduled for April 22. He also called on the government to ensure a fair election of the authorised trade union.
#Nepali Congress #House meeting #Parliament meeting #Ram Chandra Paudel #NC President Sher Bahadur Deuba #Nepali Congress Parliamentary Party
You May Also like: