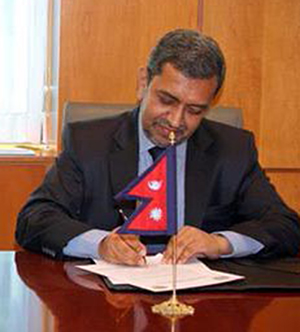 File - Nepali Ambassador Durga Prasad Bhattarai signing the joint joint communiqué’ on Tuesday, June 30, 2015. Photo: THT
Kathmandu, October 29 Durga Prasad Bhattarai presented his Letters of Credence as Ambassador Extraordinary and Plenipotentiary of Nepal to the Republic of Ecuador to Jorge Gals, acting president of the Republic of Ecuador, at a special ceremony at the Presidential building in Quito, yesterday. At a meeting immediately following the presentation of credentials, the Gals congratulated and welcomed Bhattarai as ambassador of Nepal to Ecuador and assured him of all necessary support in his efforts to expand Nepal-Ecuador bilateral relations, Permanent Mission of Nepal to the United Nations stated in a press release today. On the occasion, Ambassador Bhattarai conveyed the greetings and best wishes from the President Bidhya Devi Bhandari, congratulated the Government of Ecuador for the successful hosting of the Habitat III conference last week, and extended best wishes for the Ecuadorean Chairmanship of the Group of 77 in 2017. Areas of bilateral cooperation including biodiversity, climate change, tourism as well as cooperation at the United Nations were shared on the occasion. Acting Minister for Foreign Affairs Ambassador Fernando Yepez was present during the ceremony. Prior to the ceremony, Ambassador Bhattarai presented copies of his credentials to Guillaume Long, foreign affairs minister of Ecuador. Potential areas of cooperation between Nepal and Ecuador at the bilateral as well as multilateral levels, including tourism, climate change, biodiversity, economic development were discussed. Earlier, Ambassador Bhattarai also met Freddy Ehlers, the minister responsible for the Buen Vivir, an innovative pursuit of Ecuador for good life, focusing on a holistic and quality human lifestyle which cannot be achieved by material affluence alone, and shared thoughts about the spiritual approach to life in the East in general and in Nepal and South Asia in particular. Ambassador Bhattarai also held meetings with Ambassador Bolivar Torres Cavallo, head of South Asia division, and Dr Jorge Patricio Palacious Porras, head of International Organisations Division at the Ministry of Foreign Affairs. Nepal and Ecuador established bilateral diplomatic relations on 21 June 2006 and are working closely at various multilateral forums as members of the United Nations.
#Durga Prasad Bhattarai #Letters of Credence #President Bidhya Devi Bhandari #Nepali envoy #Quito #Republic of Ecuador #bilateral cooperation
You May Also like: