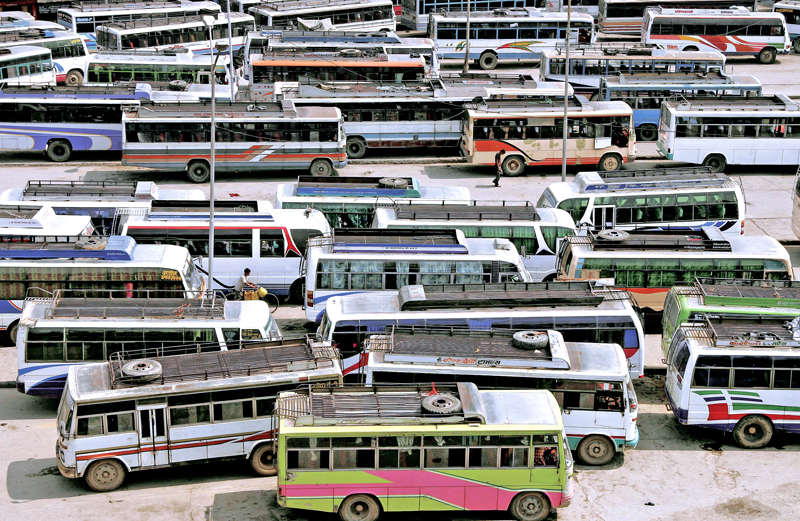 Stranded passenger vehicles are parked due to bandh called by various small parties, at the Old Bus Park, Ratnapark, Kathmandu.Photo: THT/ File
KATHMANDU: Public transport vehicles plying on Kathmandu roads will park, pick-up and drop passengers at Khulamanch in the heart of the Capital during the construction of the Kathmandu View Tower. The view tower has been proposed to be constructed at the existing Old Bus Park. Spokesperson at the Kathmandu Metropolitan City Gyanendra Karki said that preparations were underway to fence the Khulamanch with tin sheets to make the area as pick-and-drop station during the construction period. Right after the fencing completes, the area will be used as pick-and-drop station for vehicles plying on Kathmandu roads, he added. Earlier, the Tower was proposed to have 29 stories. But after the April 25 earthquake last year, only 12-storey building has been approved to build in the first phase and the building would be earthquake resistant, the KMC said. As part of the building preparations, detailed project report of the proposed project and environment impact assessment were already prepared, the KMC added. Chief at the KMC Revenue Division Mahesh Kafle said that the Jaleshwor Swachchhanda B-COE Builders Pvt Ltd. was contracted to build the Tower. The company is mandated to complete the project in 5 years and contracted to run the Tower for the next 25 years, he said. The Tower will be built on around 24 ropanis of land and the project cost is estimated to be around Rs 3.5 billion. The ground floor of the building would be designed for the parking lot while the Tower would also feature cinema halls and a swimming pool among others.
#April 25 earthquake #Kathmandu Metropolitan City #Khulamanch #Old Bus Park #Kathmandu View Tower #Public transport vehicles
You May Also like: