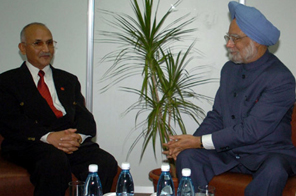 KATHMANDU; Standing committee member of the CPN-UML KP Sharma Oli on Saturday said he would meet some Indian leaders during his regular health check-up at the Apollo Hospital in New Delhi. Oli left for the Indian capital this afternoon.
Oli, who has had a kidney transplant at the Indian hospital, needs to regularly visit the hospital for health check-up.
“I will be meeting some Indian leaders during my stay in New Delhi as election has been held in India and democratic alliance has come to power in Nepal as well. But no meeting has been fixed yet,” Oli said at the Tribhuvan International Airport before leaving for New Delhi.
Oli, however, made it clear that he was not representing the new government.
“New PM Madhav Kumar Nepal, who is visiting the southern neighbour shortly, would hold important official talks with his Indian counterpart,” Oli said. He also said many bilateral issues, including the problems caused by the porous borders and the breach of the Koshi River, would also figure during the PM’s India visit.
Before leaving for India, Oli also met President Dr Ram Baran Yadav, PM Nepal, NC president Girija Prasad Koirala and Rastriya Janashakti Party president Surya Bahadur Thapa.
Oli said they talked about the expansion of cabinet, law and order situation in the country, growing culture of impunity and packages for providing relief to the people. “Basically, I held political consultations with the PM, Koirala and Thapa on giving final shape to the coalition
government,” Oli added.
Responding to a query on the Unified CPN-Maoist’s act of continuing agitation in parliament and the streets, Oli said the Maoists were yet to recover from the shock of being ousted from power. “We are used to such democratic exercises. But they are yet to get accustomed to such practices,” he added. On another query, Oli said there were no differences between the government and the Nepali Army as reported in some media.
“The army will abide by the government instructions and orders,” he clarified.

#Oli to meet Indian leaders
You May Also like: