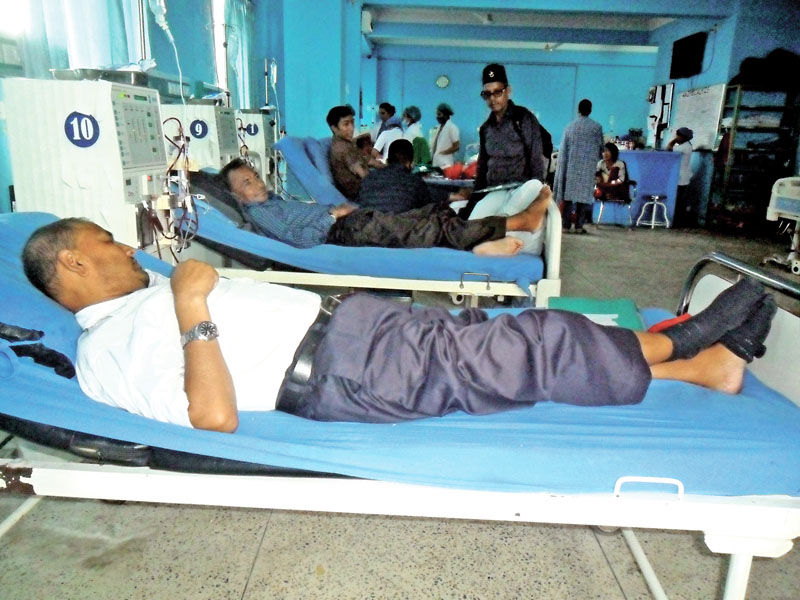 Kidney patients undergoing dialysis at the Human Organ Transplant Centre, in Bhaktapur, on Saturday, August 20, 2016. Photo: RSS
Kathmandu, August 20 Binita Oli (32) of Ota VDC, Rolpa, has been living on life-support ever since she was diagnosed with renal failure a year ago. She and her husband Lalsingh Oli moved from their village to Byansi, Bhaktapur for her treatment, leaving two daughters behind in their home under their grandmother’s care. About three months ago, while she was waiting for her turn to undergo haemodialysis at the Human Organ Transplant Centre in Bhaktapur, Binita said that her life has been very painful, and that she can neither live a healthy life nor let herself die. Today, after completing a four-hour long dialysis, Binita was resting on a chair before her departure from the service ward. Though unable to speak, she gave the reporters a warm smile. Lalsingh (34) said he never had large expectations from life. Married in his twenties, Lalsingh was living a satisfied life with his mother, wife, and two daughters in their little village in Rolpa where he provided for his family to the best of his ability, when his wife’s illness changed everything for the family. Living in the city is very expensive, and Binita’s treatment costs Rs 50,000 a month. As a result, the family is under a huge loan. Mukesh Tamrakar of Achham had just graduated from high school when his father, now 43, was diagnosed with renal failure three years ago. As the eldest child of the family, Mukesh had to take the responsibility of caring for his ailing father and abandon his education. He moved to the capital with his father where he looks after him in a rented room in the city. Mukesh is unsure of how long he will have to live this way, but hopes that his father will recover soon so he can resume his studies. In the dialysis ward, a woman carrying a bag full of medicines, injection vials, and syringes rushes to her husband who is undergoing haemodialysis. Tara Bhandari from Inaruwa of Sunsari said, “I don’t know what will come next, but I pray that my husband will recover soon.” Khagendra Kumar Chaudhary (47) said he has lost track of the expenses on his wife Sumitra Kumari Tharu’s treatment. Chaudhari does not know how he will pay his debt of around Rs 4.5 million. Sumitra’s body, however, is not ready for kidney transplant. Ambar Bahadur Tamang, 50, from Chisapani of Panchkhal Municipality-8, Kavrepalanchowk said he has already spent half a milion rupees on the treatment of his 22 years old son, who had been forced to return home from Qatar, where he was a migrant worker, after being diagnosed with kidney failure. There are many similar stories of families struggling to treat their loved ones and sinking deeper and deeper into heavy debt in the process. On May 12 this year, the then government had announced a decision to provide free dialysis services for life to renal failure patients, a decision that finally came to force from July 24 this year. Dialysis is the only measure to keep failed kidneys functioning until the patient undergoes kidney transplant. A dialysis costs a minimum of Rs 3,000, including medication. Government’s free dialysis service does not cover medication cost, however, and it provides Rs 2,500 to hospitals per dialysis. Patients celebrated the new announcement, stating that even a small help can mean a lot to the kin of renal failure patients. Many of the families with renal failure patients have taken huge loans for treatment, and the decision has instilled a ray of hope among patients and their family. However, the government has only provided the service twice a week, which is not sufficient. Often, patients have to have emergency dialyses, for which the government does not pay.
#Bhaktapur #kidney patient #Human Organ Transplant Centre #free dialysis service #haemodialysis
You May Also like: