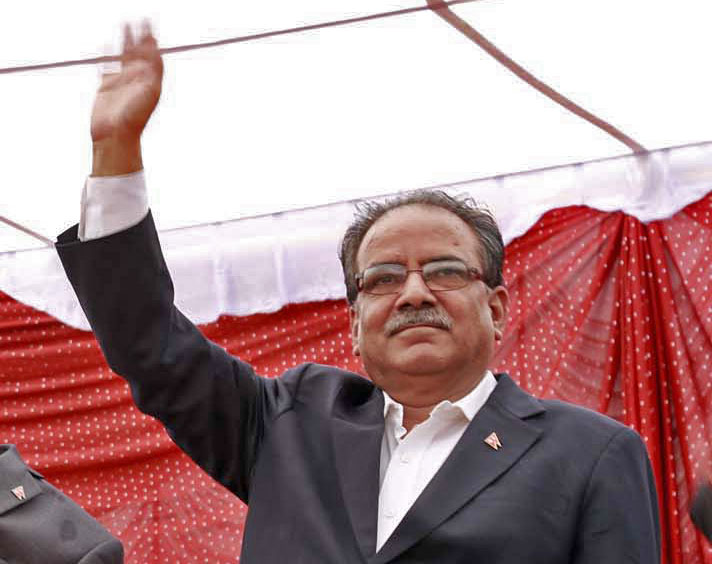 UCPN-Maoist Chairman Pushpa Kamal Dahal special function organised after promulgation of Nepal's Constitution at Tundikhel on Monday, September 21, 2015. Photo: RSS
KATHMANDU: UCPN-Maoist Chairman Pushpa Kamal Dahal has said "people's era" has begun with the promulgation of Nepal's Constitution, 2072. Addressing a ceremony at Tundikhel, organised by three major parties to welcome the new constitution, Dahal said Nepal drafted the constitution through the most pro-people and most democratic process ever practiced in the history. Recalling the 12-point agreement signed between the then seven-party alliance and the then CPN-Maoist in 2005, he said co-work between the underground armed political party and legal peaceful parties was very rare and particular to Nepal. He said the new Constitution was achievement come out from all democratic struggles, including armed and peaceful, held in last 70 years. Meanwhile, Dahal said Nepali people take suggestions from neighbouring nations positively, but they are never ready to accept whatever they said. "We are ready to cooperate with your genuine concerns," he said, urging them to pay due respect to integrity and independence of Nepal. "We want to be your friends," Dahal said, "We are not your 'Yes men'." Dahal was of the view that implementing the new Constitution is very challenging. "But, it can only be implemented with unity among Nepali people," he claimed. Hinting toward agitating Madhesi parties, the Maoist leader said the Madhesi people have got the most benefits from the federal structure. Likewise, issues of inclusion being raised by Madhesi parties has also been addressed, he claimed. "The issue of citizenship that your were raising for years has been solved for ever with this Constitution," Dahal said, in a bid to agitating forces, "The issue of province delineation can also be solved through talks." READ ALSO:
#UCPN-Maoist #Pushpa Kamal Dahal #Nepal's Constitution 2072
You May Also like: