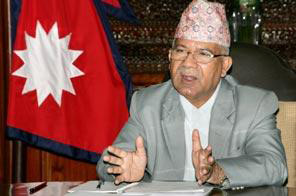 KATHMANDU: Prime Minister Madhav Kumar Nepal and UCPN-Maoist chairman Prachanda today explored the possibility of ending the political deadlock in parliament and endorsing the fiscal budget.
The government has not been able to pass the budget due to the main opposition’s continued obstruction of the House over the President’s May 3 move to reinstate the then army chief, Rookmangud Katawal.
“We dwelt on ending the deadlock in the Parliament and passing the fiscal budget,” the Maoist boss told mediapersons after conferring with PM Nepal at the latter’s residence in Koteshwor. But he did not commit on
allowing the Parliament to pass the budget.
Bishnu Rijal, press advisor to the PM, said the PM had asked Prachanda to let the Parliament pass the budget as the nation was facing financial crisis. Prachanda is said to have replied that he would take a decision to this effect only after the party’s standing committee meeting, which kicked off today.
Meanwhile, the three-member taskforce of the UCPN-M, Nepali Congress and CPN-UML failed to break the ice over the nitty-gritty of the sankalpa prastav proposed for ending the deadlock. The taskforce, failing to sort out the issue, decided to refer it to a top-level meeting of the three parties. “The taskforce made no headway on the President’s move,” NC leader Krishna Prasad Sitaula said.
Maoist leader Dev Prasad Gurung, a taskforce member, said the meeting had felt the need to take the suggestion of top-level meeting for finalisation.

#pm #Prachanda talks yield little
You May Also like: