Ruling parties decide not to wait for UDMF for poll dates 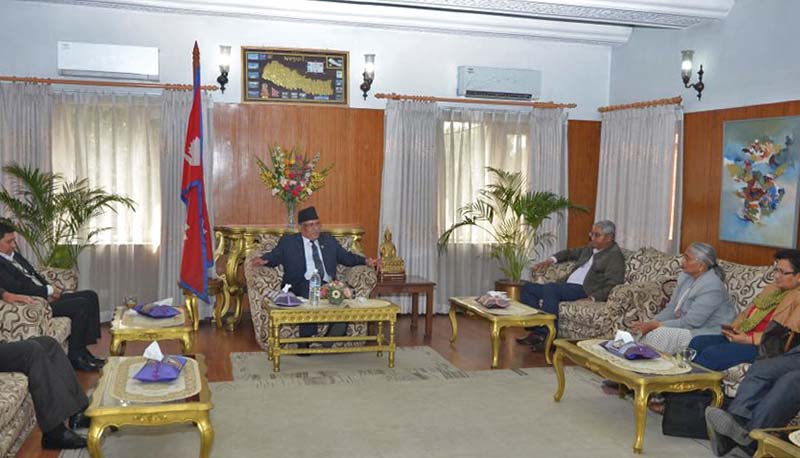 Prime Minister Pushpa Kamal Dahal in a meeting with the Nepali Congress leaders at his residence, in Baluwatar on Sunday, February 19, 2017. Photo: PM's Secretariat
KATHMANDU: Ruling Nepali Congress and CPN Maoist Centre have decided that they could not address the United Democratic Madhesi Front (UDMF)'s demand to postpone the announcement of the local poll dates till the finalisation of the Constitution amendment bill. The parties held a meeting at the Prime Minister's residence today and decided to announce local poll dates as soon as possible. "The ruling parties were clear about first concluding the Constitution amendment process and holding elections," Maoist leader Narayan Kaji Shrestha told media after the meeting, "However, the present situation does not allow that. Hence, a decision was made to announce the date of elections soon."

Prime Minister Pushpa Kamal Dahal in a meeting with the Nepali Congress leaders at his residence, in Baluwatar on Sunday, February 19, 2017. Photo: PM's Secretariat
Prime Minister Pushpa Kamal Dahal had called the meeting to decide the ruling parties' next move after the agitating Front reject his proposal to take the amendment and the polls preparation side by side. Just on Saturday, the two parties had met top UDMF leaders in a bid to convince them for the polls announcement. But, the meeting had failed to produce results as both the sides expressed reluctance to accept requests of other parties. Also yesterday evening, the CPN MC Headquarters had mandated Chairman Dahal to hold final consultations with the concerned sides and fix the poll dates as soon as possible.

It has been learned the parties agreement that the next Cabinet meeting to be held either on Monday or Tuesday would announce the poll dates.
#Nepali Congress #United Democratic Madhesi Front #UDMF #Sher Bahadur Deuba #Pushpa Kamal Dahal #constitution amendment #CPN Maoist Centre #local poll dates #local level elections
You May Also like: