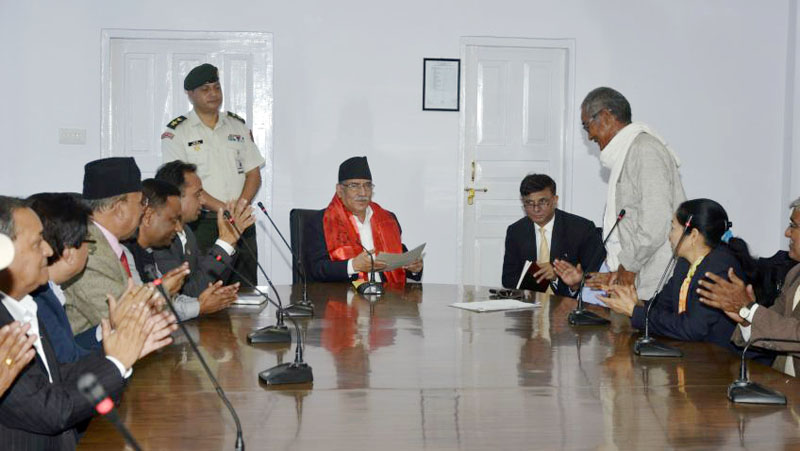 Prime Minister Pushpa Kamal Dahal receives a memorandum submitted by a delegation representing Siraha district in Baluwatar, Kathmandu on Tuesday, October 25, 2016. Photo: PM's Secretariat.
KATHMANDU: Prime Minister Pushpa Kamal Dahal said that he would do his best to develop Siraha district. He made the statement while receiving a memorandum submitted by an all-party and all-sides delegation from Siraha district. PM Dahal said that he had not forgotten the promises he made with the people of Siraha at the time of elections, according to the Prime Minister's Secretariat. Dahal assured that the incumbent government would extend its necessary support for the development of the district. The Prime Minister also informed the delegation that he would soon travel to Siraha to address a mass meeting. "I had scheduled my first programme outside Kathmandu in Siraha after I became the Prime Minister. However, I could not attend it due to bad weather. I am too very disappointed that I could not go there. Now I will arrange time and will come to meet the Siraha people soon," he said. In the meeting, the delegation members stated that Siraha lagged far behind in terms of development and drew Prime Minister Dahal's attention to the need of undertaking river control projects, building a well-equipped hospital to treat snake bite cases and children's hospital and constructing and repairing roads, including the Hulaki road.
#Siraha #Pushpa Kamal Dahal #Baluwatar #Siraha development #Siraha leaders #Siraha leaders Dahal meeting
You May Also like: