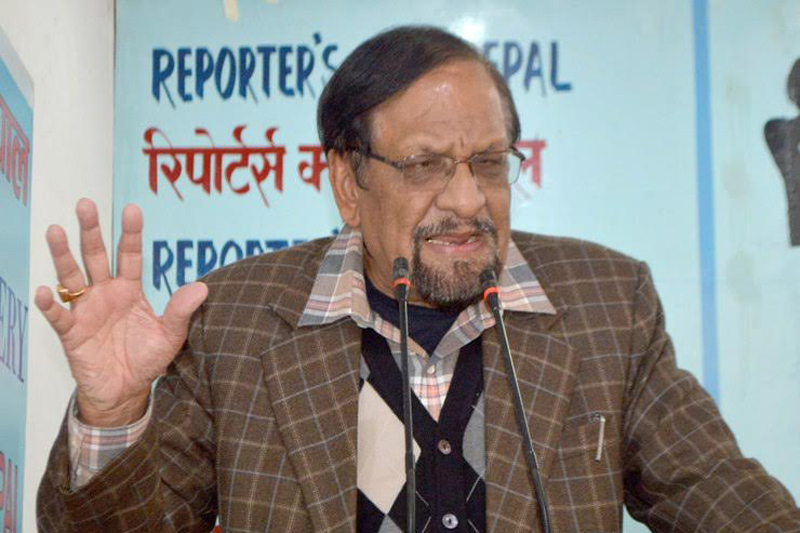 Nepali Congress leader Ram Sharan Mahat speaks with journalists in Kathmandu, on Friday, December 16, 2016. Photo: Reporters' Club Nepal
KATHMANDU: Nepali Congress leader Ram Sharan Mahat on Friday suggested that the Parliament put the Constitution amendment proposal on hold and prepare for the local elections. Speaking with journalists in Kathmandu today, the leader said postponing the amendment process and putting forth discussions on the election bills could be the best way out from the current stalemate. He, however, criticised the main opposition CPN-UML for obstructing the House business in protest of the amendment bill. "It is wrong on the part of the opposition party to obstruct discussions on the amendment proposal," he said, adding the government should not withdraw the bill as the UML demanded. He demanded that the Parliament Secretariat and the government move forward election-related bills and the impeachment motion against the Commission for the Investigation of Abuse of Authority Chief Lok Man Singh Karki in the Parliament. Meanwhile, the former Minister for Finance said no one should give undue pressure to the Local Body Restructuring Commission to complete its works in a hurry. Mahat also reaffirmed his party President Sher Bahadur Deuba's claim that major political forces had already forged an agreement to hold local elections under the existing structure.
#CPN-UML #Nepali Congress #Ram Sharan Mahat #local elections #constitution amendment bill #constitution amendment proposal
You May Also like: