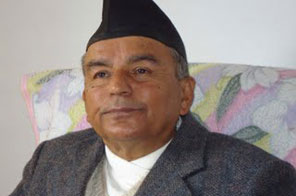 KATHMANDU: Vice-president of the Nepali Congress (NC) Ramchandra Poudel on Saturday said that the party would move ahead with collective leadership, placing high premium on policy and mass cadres.
At a face-to-face programme organised here by the Reporters Club Nepal, he further said the recently held Mahasamiti meeting has mandated the party to move ahead with the principle of institutionalisation, transparency, inclusion and decentralisation. “The party has ushered into a new era,” he said, adding, "Nepali Congress will remain in the centre of politics by bringing non-democratic forces to democratic mainstream". He also urged the UNMIN to effectively monitor and supervise the cantonments of Maoist combatants.