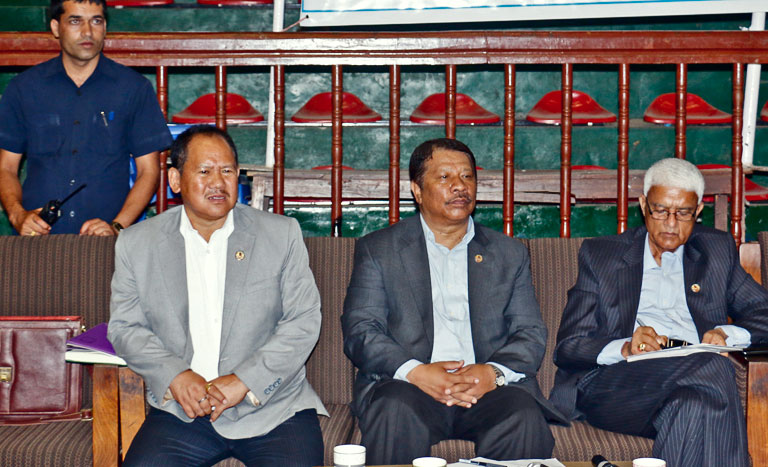 Deputy Prime Minister Prakash Man Singh (c) taking part in the public hearing on the draft constitution at the Dasharath Stadium in Kathmandu on Monday, July 20. Photo: RSS
KATHMANDU: Protesters demanding that Nepal be turned back into a Hindu nation scuffled with police Monday and threw chairs at the country's deputy prime minister when he was collecting suggestions on a draft constitution. About 200 protesters from Rastriya Prajatantra Party-Nepal stormed into the national stadium chanting slogans as Deputy Prime Minister Prakash Man Singh addressed a crowd gathered as part of a campaign to collect public suggestions. No one was hurt and riot police pushed the protesters out of the arena. Nepal was declared a secular state after its centuries-old monarchy was abolished in 2008 and was declared a republic. The monarchs that ruled Nepal promoted Hinduism and the kings were believed by some to be a reincarnation of the Hindu god Vishnu. "Nepal is a Hindu state and will remain a Hindu state. Almost all Nepalese are Hindus and we will continue to protest until the country is declared a Hindu state once again," said one of the protesters, Madhav Bhattarai. He said that Nepal was declared a secular state only "because of foreign influence." The government sent lawmakers to their constituencies on Monday and Tuesday to collect suggestions on the draft, which was supposed to be prepared in 2010 by the first Constituent Assembly elected in 2008. The assembly failed to complete the task in four years and another assembly elected in 2012 has also struggled because of disagreements between political parties. Nepal has been governed by an interim constitution for seven years. But since a devastating earthquake killed nearly 9,000 people in April, there has been pressure on the parties to speed up the constitution process. One major issue is deciding how to divide the country's federal states. At the meeting in Kathmandu Monday, participants also voiced concerns about the rights of women and minorities. "Women are still not given equal rights in the new draft despite promises from the politicians," said Sita Shrestha, a housewife.
#RPP-N #secularism #Draft constitution #Rastriya Prajtantra Party-Nepal #DPM Prakash Man Singh #Secular state #Hindu nation
You May Also like: