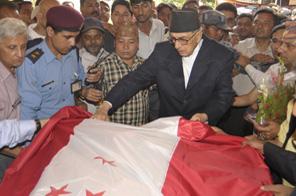 KATHMANDU: Nepali Congress leader Shailaja Acharya has passed away. Acharya died while undergoing treatment at TU Teaching hospital in Maharajgunj at about 4.25 am today, according to the doctors who had been treating her. Acharya had been admitted to the hospital after she complained of sudden uneasiness and had been put on ventilator support in the Intensive Care Unit since Wednesday.

Meanwhile, to pay their last respects, huge masses of Nepali Congress supporters and its leaders are turning out in the Nepali Congress party office premises at Sanepa on Friday morning. Her body is being displayed since 9 am onwards to allow people to pay their last respects. Her body will then be taken to Pashupati Aryaghat for the final ritual later in the afternoon.