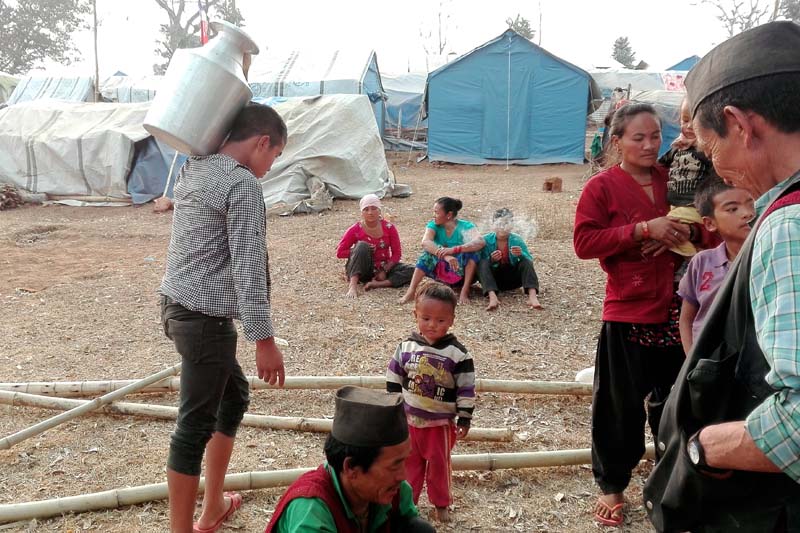 An earthquake survivor carries a vessel of drinking water towards his temporary shelter based in Salyantar-1, Dhading on Sunday, March 6, 2016. At least 43 families of Kapurgaun of Lapa have been taking shelter at open pasture of Pauwa, Salyantar- 1 after their home village was ravaged by the April 25 earthquake. Photo: Lekhanath Pandey/THT
KATHMANDU: A task force has been formed under the leadership of National Farmers' Network – comprising farmer associations and organisations associated with various political parties – to take stock of the real situation of landless farmers of earthquake-affected districts. A nine-member task force has been formed under the leadership of Bhanu Sigdel, Chairman of the main opposition Nepali Congress's sister organisation Nepal Kisan Sangh. Sigdel informed that the task force was formed in a way to submit a report within seven days from the discussion held between National Land Rights Forum and National Farmers Network in Kathmandu on Friday. The task force would visit districts including Rasuwa, Nuwakot, Sindhupalchowk and Lalitpur among the earthquake most-affected districts of Nepal. Following the field visit, the Network would pile pressure on Prime Minister and National Reconstruction Authority to rehabilitate and resettle the landless farmers who have been left in lurch after the devastating earthquake, Sigdel said.
#earthquake victims #National Farmers' Network #farmer associations
You May Also like: