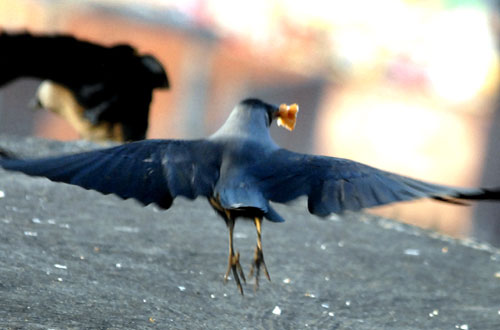 FILE: A crow scavenges for food in Chabahil, Kathmandu on the first day of Tihar festivities when crows are worshipped as messengers of human beings, on Thursday, November 4, 2010. Photo: Rajesh Gurung/THT
KATHMANDU: Tihar, the second largest festival of Nepali Hindus, begins today. Also known as the Yampanchak, the festival is observed for five days. The first day of the festival is observed as Kaag Tihar. The day is observed by feeding crows, regarded as messengers in the Nepali society. The second day is Kukur Tihar (worship of the dogs) while the third is Gai Tihar and Laxmi Pooja (worship of the cows and Goddess Laxmi). Likewise, the fourth day is observed as Goru Pooja (worship of the oxen), and Mha Pooja (worship of own soul) in the Newar community. Similarly, the fifth day is Bhai Tika. Bhai Tika, a festival to celebrate the bond between brothers and sisters, falls on November 1 this year. Sisters put Tika wishing for longevity and prosperity of their brothers, while brothers, in turn, give gifts and pledge to take care of their sisters. The auspicious time for the Bhai Tika this year is at 11:52 am. The government has announced a three-day public holiday starting from Laxmi Pooja to Bhai Tika for the festival.
#Tihar #Bhai Tika #Kukur Tihar #Kag Tihar #Gai Tihar #Laxmi Pooja #Goru Pooja #Mha Pooja
You May Also like: