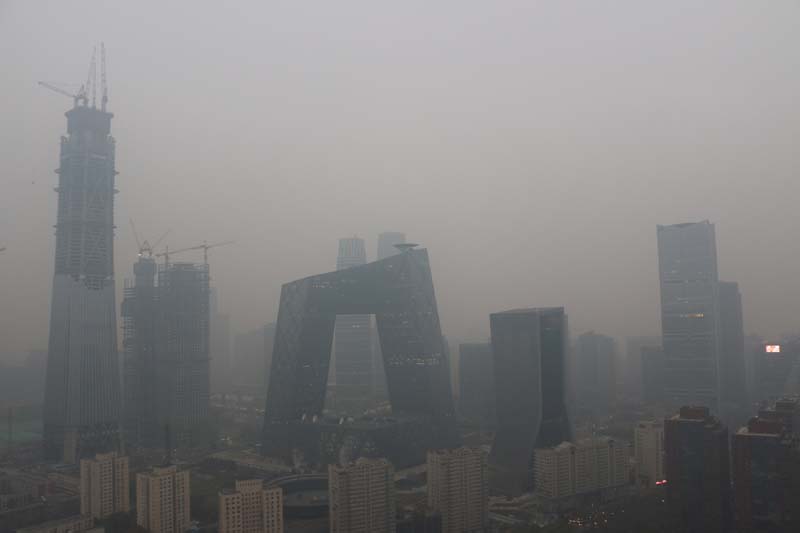 File - Beijing's landmark buildings are seen during a polluted day in Beijing, China, on November 18, 2016. Photo: Reuters
BEIJING: Beijing's city government has issued a red alert for severely high levels of air pollution in the Chinese capital, running for five days from Friday evening, the environmental protection bureau said on its official Twitter-like Weibo account.
The city issued its first ever red alert on smog in December last year, after adopting a colour-graded warning system in a crackdown on environmental degradation left by decades of breakneck economic growth. Smog expected this week will stem from air pollution accumulated in Beijing and its environs, such as the nearby city of Tianjin and the northern provinces of Hebei, Shandong and Henan, the bureau said, citing environment monitoring forecasts. New environmental protection measures took effect on Thursday, among them unifying Beijing's system of alerts with those of Tianjin and Hebei, and a ban aimed at keeping older, polluting cars off Beijing's roads. In addition, drivers of newer cars face an 'odd-even' usage limit determined by the final digit of their license-plates. Schools freed from an earlier requirement to close en masse are being given the authority to 'flexibly' cancel classes, on the basis of their needs and those of students' parents. Companies may also consider early departures for employees, or provisions to work from home. After temporary school closures and construction halts brought by last year's smog alert, the city government has tweaked its system. In February it linked the threshold for red alerts to a higher average of the daily air quality index (AQI). Red alerts are now issued when the AQI, a measure of pollutants in the air, is forecast to break 200 for more than four days in succession, surpass 300 for more than two days or overshoot 500 for at least 24 hours.
#China #Beijing #Tianjin #China pollution #environmental protection bureau #Shandong #Hebei #Henan
You May Also like: