Body donations on the rise at US medical schools 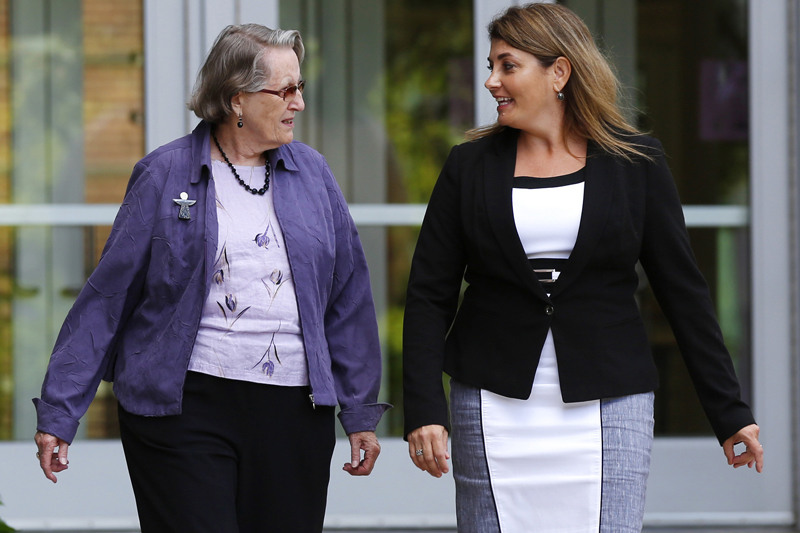 In this August 11, 2016 photo, Angela McArthur, right, director of the Anatomy Bequest Program at the University of Minnesota Medical School, walks with Jean Larson, widow of a donor in Minneapolis. Once a relatively rare option, body donation has surged at medical schools, including the University of Minnesota. Photo: AP
NEW YORK: Many US medical schools are seeing a surge in the number of people leaving their bodies to science, a trend attributed to rising funeral costs and growing acceptance of a practice long seen by some as ghoulish. The increase has been a boon to medical students and researchers, who dissect cadavers in anatomy class or use them to practice surgical techniques or test new devices and procedures. "Not too long ago, it was taboo. Now we have thousands of registered donors," said Mark Zavoyna, operations manager for Georgetown University's body donation program. The University of Minnesota said it received more than 550 cadavers last year, up from 170 in 2002. The University at Buffalo got almost 600 last year, a doubling over the past decade. Others that reported increases include Duke University, the University of Arizona and state agencies in Maryland and Virginia. ScienceCare, a national tissue bank, now receives 5,000 cadavers a year, twice as many as in 2010. One reason is that religious objections to dissection and cremation hold less sway today than in the past, said Ronn Wade, director of Maryland's State Anatomy Board. Also, bodies donated to medical schools are cremated once they are no longer needed, and the remains are often returned to their families at no expense. As of 2014, a traditional burial cost around $7,200, an increase of 29 percent from a decade earlier, according to the National Funeral Directors Association. "Funerals are expensive. That certainly has something to do with it," Zavoyna said. "Of course, it almost has this snowball effect, where you get five people to donate, and then their families tell another 25 people." Milton Larson, a longtime science teacher who was stricken with Parkinson's disease and died in 2014 at age 82, left his body to the University of Minnesota in what his wife, Jean, of Falcon Heights, Minnesota, called "his last act of teaching and generosity." But she initially struggled with his decision and said she tries not to think about the details of dissection. "To put it quite bluntly, you have to realize that they are going to cut the body of your loved one apart. That's hard," she said. Still, she plans to donate her body, too: "This is the most generous donation we can make." Cadavers are being used for an expanding range of research and training purposes, including the testing of prosthetics and new robotic surgery techniques. Medical researchers are also increasingly relying on human bodies instead of animals. "The uses that we can bring to these very precious gifts have really escalated," said John Tomaszewski, chief of Buffalo's pathology and anatomical sciences department. Some parts of the country still struggle with cadaver shortages. A state agency in Illinois has been receiving only 500 donations a year for eight medical schools, down from 750 in the 1980s. Although many programs shun advertising, the Anatomical Gift Association of Illinois is buying more newspaper ads to try to boost numbers. When donations fall short, Duke and other schools turn to private suppliers that obtain cadavers through donation, often in other countries. In some states, schools can obtain bodies that go unclaimed by their families. Some medical schools have experimented with alternatives to real bodies, such as rubber or plastic cadavers, or virtual anatomy courses taught on computers. But "there's no substitute for the real thing, because ultimately these people are going to be taking care of patients," said Dr. Michael Zenn, a surgery professor at Duke. "It's just a priceless donation."
#body donation #University of Minnesota #National Funeral Directors Association #US medical schools
You May Also like: