What are coral reefs and why are they important 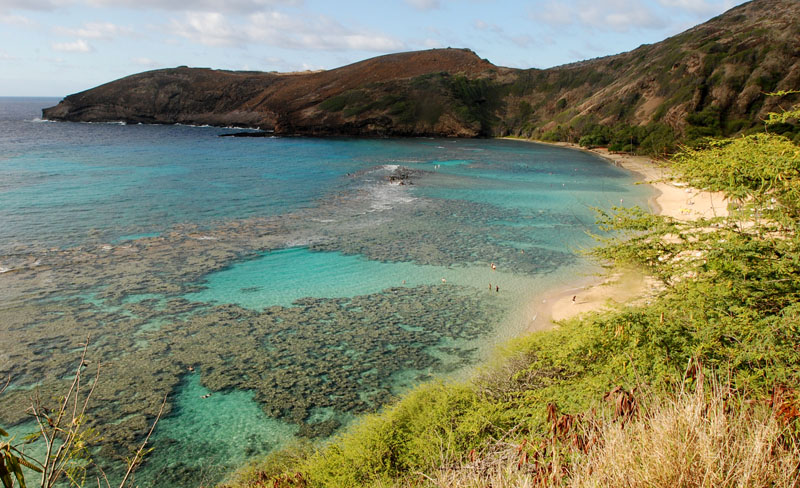 Oahu’s Hanauma Bay near Honolulu, on Wednesday, May 6, 2016. Much of the inner reef at Hanauma Bay is dead after decades of tourist interaction, but the outter reef is still relatively healthy. Photo: AP
HONOLULU: This week, more than 2,000 international reef scientists, policymakers and stakeholders are gathering in Hawaii to discuss what to do about the global decline of coral reefs. The International Coral Reef Symposium convenes on Monday in Honolulu where attendees will try to create a more unified conservation plan for coral reefs. Here's a look at what coral is, what role it plays in human life and what might happen if more of these important ecosystems are lost: What are coral reefs Corals are animals related to jellyfish and anemones. The organisms grow and form reefs in oceans around the world. Coral reefs support the most species of any marine environment, hosting countless kinds of fish, invertebrates and even mammals. Coral reefs are comparable to rainforests in their biodiversity and importance to our overall ecosystem. According to the National Oceanic and Atmospheric Administration, there are over 800 species of coral that build reefs and hundreds of other soft and deep-sea coral species in the world. Bleaching and mortality When dramatic environmental changes occur, corals go through a process known as bleaching. Essentially, the corals become stressed, often from warmer water temperatures but also from things like pollution and acidification, and then release the symbiotic algae that they use for nutrition. The loss of these symbionts leaves the coral white or pale colored, a sure sign the organism is stressed. If the bleaching is severe or recurs over consecutive years, the coral will likely die. Some coral has shown resilience in warmer and more stressful conditions, and scientists are working to figure out why some do better than others. Human uses Coral reefs are huge drivers for many coastal tourist economies, bringing in billions of dollars of revenue annually. Many vacationers come to the tropics just to snorkel and dive on pristine reefs. But what many people don't know are the myriad of other ways humans benefit from coral reefs. Reefs shelter land from storm surges and rising sea levels. Coral has even been found to have medicinal properties, including painkillers that are non-habit forming. Beyond that, coral reefs are home to the vast majority of fish that humans consume, and some island nations rely almost entirely on the reef for their daily sustenance. Saving reefs Researchers at the University of Hawaii's Institute of Marine Biology have been taking samples from corals that have shown tolerance for harsher conditions in Oahu's Kaneohe Bay and breeding them with other strong strains in slightly warmer than normal conditions to create a super coral. The idea is make the corals more resilient by training them to adapt to tougher conditions before transplanting them into the ocean. Another program run by the state of Hawaii has created seed banks and a fast-growing coral nursery for expediting coral restoration projects. Officials came up with a plan to grow large chunks of coral in a fraction of the time it would normally take. NASA's Jet Propulsion Laboratory is taking a wider view, recently launching a three-year campaign to gather new data on coral reefs from aircraft flying at about 23,000 feet above the ocean.
#Hawaii #coral reefs #Coral Reef mortality #international reef scientists #International Coral reef Symposium #Honololu
You May Also like: