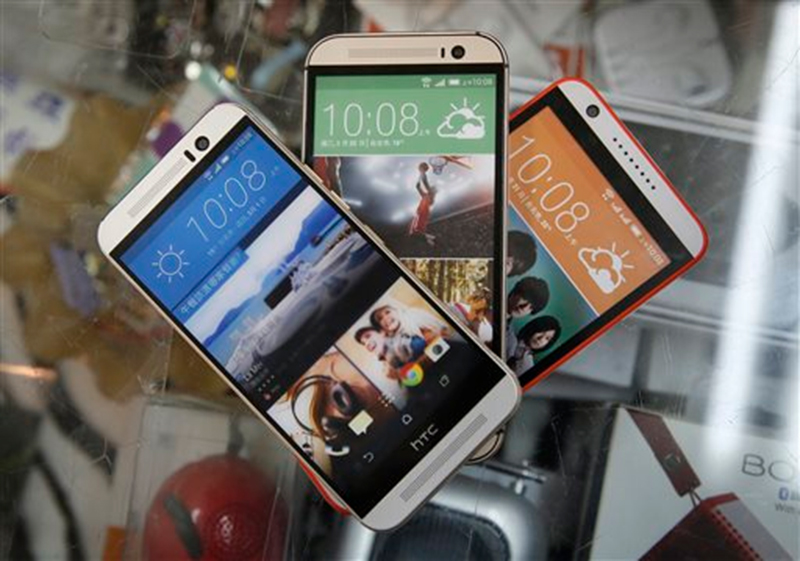 Used HTC smartphones sit on display in a phone shop in Taipei, Taiwan, Monday, September 21, 2015. Photo: AP
TAIPEI, TAIWAN: Taiwan's stock exchange has removed smartphone maker HTC from its index of blue chip companies, signposting the dramatic decline of a business that once ranked as Taiwan's No. 1 brand and dazzled consumers with some of the world's first Android handsets. The exchange removed HTC from its FTSE TWSE Taiwan 50 index on Monday after the company's market value declined below the level required for inclusion in the market benchmark. The index lists Taiwan's 50 biggest companies which together represent 70 percent of the market's value. It's a humbling comedown for a company that once sold more than 1 in 10 of phones worldwide, received plaudits for innovation and represented Taiwan's ambitions to spawn its own globally recognized electronics brands. In the past several years, HTC has struggled because of marketing and supply chain glitches as well as intense competition from Apple, Samsung Electronics and Chinese makers such as Xiaomi. Last month, it announced a 15 percent cut in its staff of about 15,700 after a second-quarter loss of $247 million. "They made a lot of missteps, but they were also caught in the crosshairs of a shift to commoditization of the market," said John Brebeck, senior Taipei adviser with Hong Kong investment consultancy Peace Field. HTC, an 18-year-old company that started out doing contract work for other high-tech firms, came out with its HTC Magic phone in 2008. It ran on Google's Android operating system when other vendors were still working on feature phones — the kind with buttons rather than touchscreens. Company revenues shot up 93 percent in 2010. By early 2011 those handsets, backed by a reputation for lightness and technical quality, had taken HTC to its world market share peak of 10.7 percent. That year the New York-based consultancy Interbrand ranked HTC as the No. 98 brand worldwide. That laurel cast the company whose initials stand for "high tech computer" as a model for an island dependent for decades on high-tech contract work but with few globally known brands of its own. HTC's decline began as the number of smartphone vendors surged along with total shipments that reached 1.2 billion units last year, up 28 percent over 2013. Samsung and Apple captured the United States through sales contracts with wireless carriers while local Chinese brands such as Lenovo and Xiaomi led in China as HTC was trying to establish a customer base. Its world market share is estimated now at 3 to 4 percent. HTC attributes its losses to slowing use of high-end Android phones, changes in its product lineup and increased competition. It will keep working on high-end handsets along with connected devices and "virtual reality," the company's media office said last week. "We remain confident that, with the diversification of our product portfolio and our continued investment in innovation, our market share will grow," it said. Analysts say HTC underspent on marketing, perhaps underestimating the impact of the iconic name recognition of Apple and aggressive publicity campaigns by Samsung. Sales techniques increase in importance as smartphone designs vary less and less over time. HTC also moved too slowly to secure phone components as competition grew, analysts believe. For a flagship high-end One series smartphone released in 2013, HTC used a processor that the supplier had already replaced with a faster one. "Its efforts to increase tech innovations were dragged by sloppy supply chain management," said Jade Chang, an analyst with Taipei-based research firm Marketing Intelligence & Consulting Institute. HTC's removal for the top 50 index "reflects the heavy losses its stock has suffered in recent sessions," she said. Taiwan's stock exchange said in a statement that HTC had "not met standards" for the top 50. Its share price has declined about 60 percent in the year to date, extending a steady fall since 2011. The exchange moved HTC to the FTSE TWSE Taiwan Mid-Cap 100 Index, a list of 100 publicly traded firms with moderate market capitalization.
#smartphone maker #HTC #blue chip index #FTSE TWSE #blue chip companies #dramatic decline of a business #Taiwan's No. 1 brand #competition from Apple #publicity campaigns #Sales techniques #smartphone designs #secure phone components #Taipei-based research firm #Marketing Intelligence & Consulting Institute
You May Also like: