Rhino population grows by more than hundred in conservation boost

Hope springs from ashes of tragedy

Hope springs from ashes of tragedy

KATHMANDU: It was in 2002 and an American couple trekked to the village of Phortse in Solukhumbu district to begin their climbing activities on the world’s highest mountain. 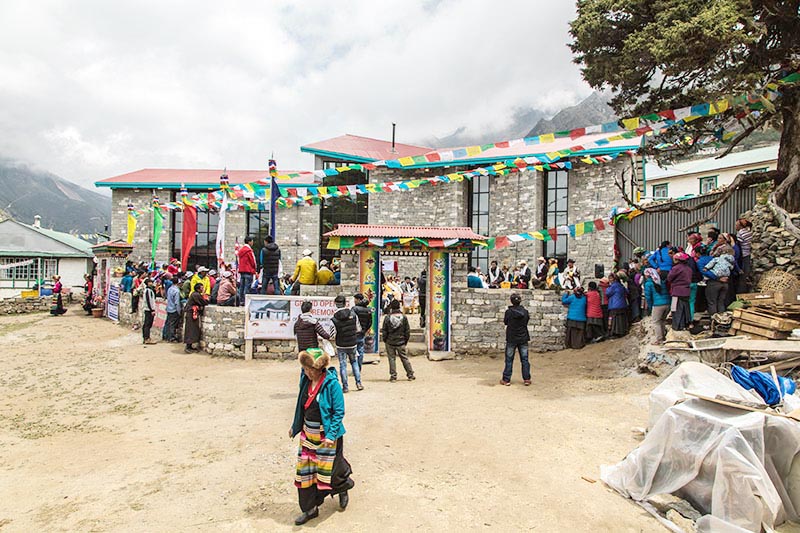 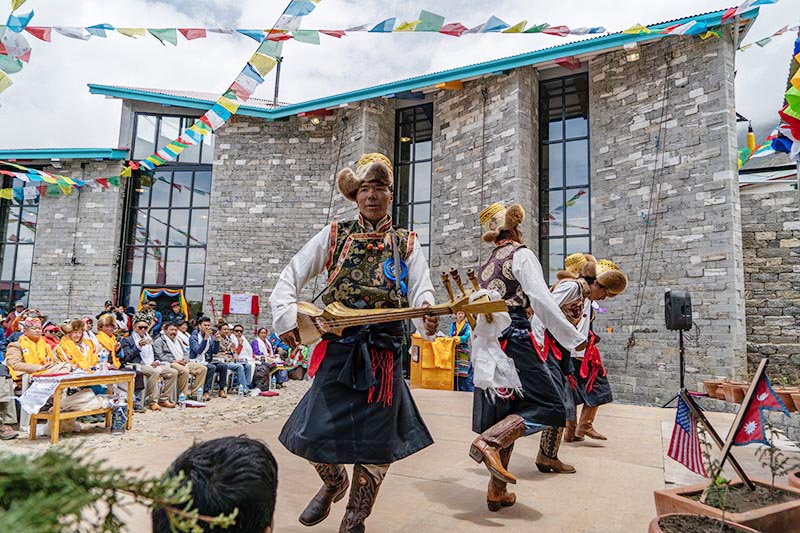 Performers at the formal opening of Khumbu Climbing Centre, in Solukhumbu, on June 13.

“We had decided to do some ice climbing at Phortse before heading to the Everest Base Camp along with our Sherpa guides,” recounted Jennifer Lowe-Anker adding that all the Sherpa guides were fascinated watching them climb.

Jennifer, an artist and author, talked to Conrad Anker, her climbing partner, to contribute something to the Khumbu people, from which they could learn safe climbing techniques.

“The Sherpa guides’ reaction inspired us to give back to the locals,” she shared.

Performers at the formal opening of Khumbu Climbing Centre, in Solukhumbu, on June 13.

“The KCC facility boasts the highest Walltopia indoor training wall in the world at 3,840 metres while the wall was designed by Noah Bigwood of Momentun Gyms and Ryan Walters who constructed it onsite,” Conrad informed.

Ferrying some of the construction materials from Kathmandu was quite challenging, recounted Jiban Ghimire, Managing Director at Shangri-La Nepal Treks, who provided logistic support to the KCC facility.

In 2007, two families — Lhakpa Dorje, Nawang and Karma Tsering, and Panuru and Pasang Diki generously donated land for the KCC building, while from 2008-2010, graduate students from the Montana State University School of Architecture launched and completed a design collaboration with Phortse village under the direction of Prof Mike Everts.

“Dean Soderberg from the US oversaw the initial groundbreaking and construction work. Completion of the facility was in phases with a four year push since the 2015 earthquake,” Jennifer shared. “While the volunteers carried out construction work of KCC, we added English language programme because proper communication in any dangerous situations is important.”

Jennifer believes that English is the lingua franca in most of the mountains. “Lila, wife of Barry Bishop, also trekked to the Everest region to open English language class.”

According to Jennifer, the KCC facility, built with a cost of Rs 74 million, was a collaborative effort.

“Its training is safeguarding all Himalayan climbers who employ Nepali guides and high altitude workers during the climbing season,” Conrad said, adding that it has not only been supporting them but also safeguarding the indigenous climbing community in Nepal.

Each winter for two weeks, technical climbing skills are taught along with English language, mountain safety, rescue, and wilderness first aid. “In the beginning, our instructors were qualified western climbers and guides who had experience in the Himalayas. Most of the teachers now are Nepalis.”

The KCC is home to the technical climbing school and gym, the Jon Johnston Mountaineering Library, and the Magic Yeti Children’s Library which are overseen by the ALCF and KCC board. The libraries have a collection of over 1,200 mountaineering books donated by American Alpine Club member Bill Felstiner of California. The medical clinic inside the KCC facility is being overseen by the Himalayan Trust. It has also been serving as a community centre and earthquake refuge for the village of Phortse at an altitude of above 3,800m. In recent years, there were over 500 KCC graduates working on Mt Everest in the main climbing season.

“It is our hope that the KCC will thrive under direction of the local KCC and Phortse leadership,” said Jennifer.

Amrit Ale, Phunuru Sherpa, Ang Dawa Sherpa and Danuru Sherpa will be managing and overseeing the facility as its doors were opened on June 13, which was also a celebration to recognise years of planning, building and rebuilding, learning, development, growth and gratitude, countless hours spent by volunteers from around the world, local workers, tremendously talented craftsmen and women.

It is a labour of love for a community extending far beyond the terraced fields and lives of those instrumental to KCC’s establishment. It’s also a celebration of opportunity for a whole new generation of climbers as well as traders — men and women, artists, lodge owners, farmers, teachers, specialists, among others.

A lot of volunteers worked for the project over the past years. Now the community owns it. There is no debt, and the building is completely paid for.

“I also must stress how grateful we are to the many western volunteer instructors and builders who came to contribute time or oversee the construction,” said Jennifer.

Phillip Henderson who has 20 years' experience at the National Outdoor Leadership School will be onsite this coming September to help initiate the business plan and operations, Jennifer, also the ALCF President, concluded.