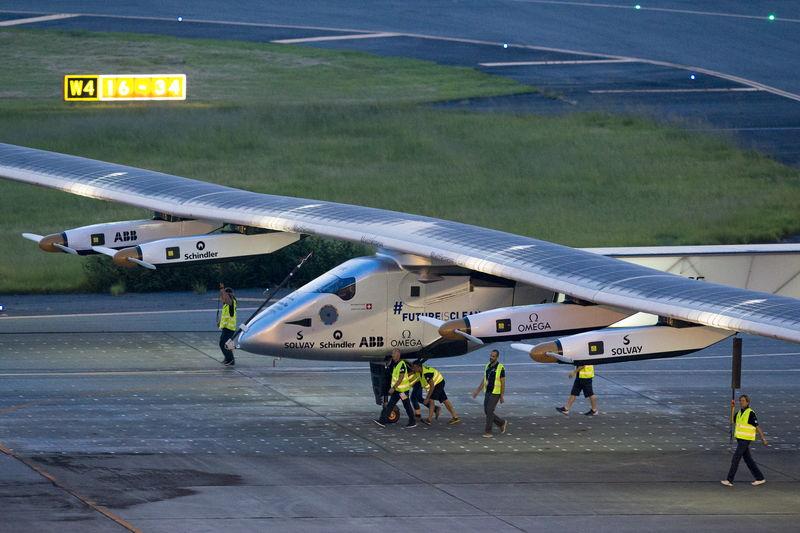 Crew members push the solar-powered plane Solar Impulse 2 to its parking position at Nagoya airport after changing weather conditions thwarted a planned take-off, June 24, 2015. Photo: Reuters
HONOLULU:  A Swiss man attempting to circumnavigate the globe with an aircraft powered only by the sun's energy has broken a world record for the longest non-stop solo flight, the project team said on Thursday. The Solar Impulse, which took off from Japan on Monday on the seventh leg of its journey and is expected to land in Hawaii early on Friday, shattered the solo-flight record threshold of 76 hours while crossing the Pacific.. The aircraft, piloted alternatively by Swiss explorers Andre Borschberg and Bertrand Piccard, set off on its 22,000-mile (35,000-km) journey around the world from Abu Dhabi on March 9. (www.solarimpulse.com/). "Can you imagine that a solar powered airplane without fuel can now fly longer than a jet plane!" said Piccard in a statement. "This is a clear message that clean technologies can achieve impossible goals." The plane, which was piloted by Borschberg when it broke the record, weighs about as much as a family sedan and has 17,000 solar cells across its wingspan. Overall, its trip around the globe was expected to take some 25 flight days, broken up into 12 legs at speeds between 30 to 60 miles per hour (50 and 100 kph). The plane was expected to land around sunrise on Friday at Hawaii's Kalaeloa Airport, a former military base, according to a website logging updates of the journey. The Solar Impulse 2 initially left Nanjing, China, on May 31 for Hawaii, but was forced to cut short its bid a day later due to what Borschberg termed "a wall of clouds" over the Pacific. It landed in the central Japanese city of Nagoya. The solo record was previously set in 2006 by American adventurer Steve Fossett, who flew the Virgin Atlantic Global Flyer for 76 hours non-stop. The Solar Impulse remained airborne three consecutive days and nights, producing its own power with solar energy, the pilots said. The Solar Impulse 2 is the first aircraft to fly day and night without any fuel, solely using the sun's energy. Borschberg navigates alone in an unheated and unpressurized cockpit, sleeping in bursts of 20 minutes while on autopilot. The next leg of the flight will be from Honolulu to Phoenix, Arizona, and then Borschberg and Piccard will fly together across the Atlantic on a return path to Abu Dhabi. Studies, design and construction took 12 years and a first version of the craft rolled out in 2009 broke records for heights and distances traveled by a manned solar plane. "The experience of flight is so intense that I can only focus on the present moment and discover how to deal with my own energy and mindset," Borschberg said in a statement.
#Solar Impulse #Solar engergy #Solar aircraft #Andre Borschberg #Bertrand Piccard
You May Also like: