The epitome of love

Boy meets girl, they go on a date, get to know each other and then the happily ever after begins with marriage —  a common scenario now. But there were days when this was unimaginable. Here are four couples who got married according to the tradition then, some got to see one another only on the day of their wedding, and some few days before the wedding was finalised. However it happened, love came their way after marriage. Now it has remained intact for decades making these couples 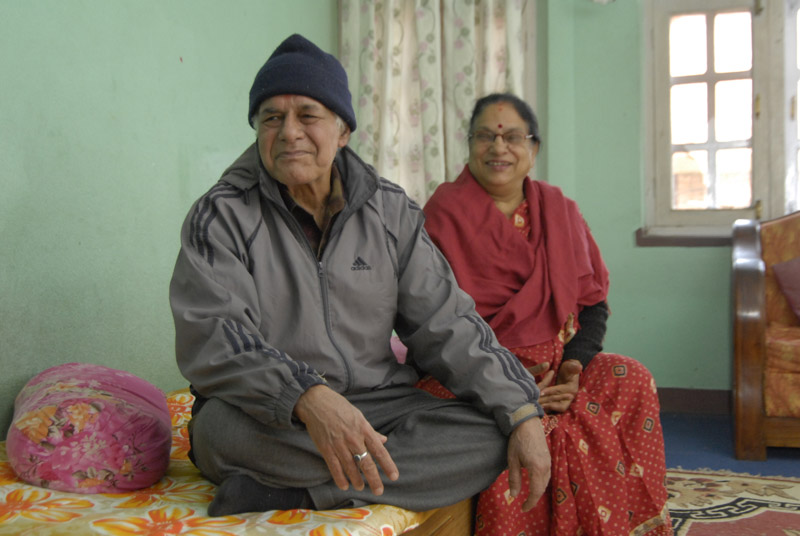 Photo: Naresh Shrestha/THT
Mesmerised by beauty Om Mani Sharma, 74 and Bhawani Devi Sharma, 64 Together for 42 years Theatre actor Om Mani Sharma never thought of getting married till he saw Bhawani Devi Sharma in Kabiraj Kosh Nath Devkota’s home in Dhobidhara. He was mesmerised by her beauty at first sight. “I turned red when I saw her,” smiles Om Mani, who was 30-year-old then. He didn’t have the courage to express his love. In such a scenario how could 18-year-old Bhawani Devi have any feelings for him? Kabiraj, Bhawani Devi’s uncle (fupaju), mediated to bring this couple together and they tied the knot on February 18, 1972. “I went to his village after marriage and India visit leaving the city and my family here,” shares Bhawani Devi. Life was how it was for others. “We didn’t converse with one another in loud voice because of the sociocultural context (back then husband and wife talking to each other in front of everyone was seen as inappropriate). We basically whispered,” reveals Bhawani Devi. She stayed in her new home for three years and Om Mani had to return to Kathmandu resuming work. This was the time he was away from her, so he would look at his wife’s photo. “There were no phones then. But this long distance relationship made the bond much tighter,” emphasises Om Mani. Memorable moment: The couple went to India after their marriage, which was during malamaas (every three years a particular month is believed to cause bad luck to newly-weds). As per Hindu tradition, the newly-married couples are not allowed to stay together during malamaas. Hell didn’t break loose, but they were scolded for disregarding the rituals. Annoyed when...: Om Mani gets angry when Bhawani Devi doesn’t check clothes’ pockets while washing them. Bhawani Devi is upset when Om Mani can’t give time to the family, even on Saturdays. Defining love: For Om Mani, love that emanates within one’s soul and mind will be everlasting. There is no need for one to tear his/her heart to show one’s love for the other, he states. And Bhawani Devi believes “to make life beautiful and filled with love one needs to be water if the other is a ball of fire. Compromises are essential from both sides for love to last long”.

Photo: Naresh Shrestha/THT
Love at first sight Manuj Babu Mishra, 80 and Ramala Mishra 73 Together for 56 years When artist Manuj Babu Mishra separated from his first wife, there was no female member in his family. So, he was under pressure to remarry. Thus, this around 23-year-old went to see prospective bride Ramala. He excitingly recalls their first meet, “She was wearing a red frock.” Ramala remembers the day as, “I served water to all those who had come with him (Manuj Babu) to see me.” He liked her at first sight and felt ‘she is the one for me’. And the couple got hitched in 1959. Since then Manuj Babu has never been disappointed. “It is her contribution that has made me what I am today. I joined college and university after she came to my life,” shares the artist. Memorable moment: They went to watch a movie together for the first time. “We watched Maitighar. When we returned home, Ramala narrated the story at night,” remembers Manuj Babu. Annoyed when...: “When I want to be alone in the room and make her leave, I light a cigarette,” laughs Manuj Babu. Every time her husband starts smoking, Ramala leaves the room as she hates the habit. “I have repeatedly told him not to smoke but he doesn’t listen,” she asserts. Manuj Babu on the other hand hates it when Ramala denies to go on trips with him. So, instead of arguing with her, he prefers going for trips alone. Defining love: “Whatever the heart accepts, know that is love,” feels Manuj Babu. “However, the definition of love has changed these days. After reaching a certain age people look for like-minded people as their partner — it is long lasting and scientific. The techniques younger generation is applying is better than the traditional one where parents had to search their child’s better half. Love shouldn’t be imposed.”

Photo: Naresh Shrestha/THT
An awkward beginning Madan Mani Dixit, 93 and Rita Dixit, 89 Together for 78 years Litterateur Madan Mani Dixit had not seen Rita until they got married. While Madan Mani was 16-year-old, Rita was 12. “I felt like someone kept a red silk pouch beside me,” Madan Mani recalls the feeling when Rita first sat next to him at the wedding ceremony. Living in an extended family, they didn’t talk to one another for two years after their wedding. Rita remembers, “He didn’t even call me by my name. When he had to call me he would shout ‘Yey...’ Memorable moment: Among many incidents, the couple remembers watching the first movie together in 1940. They watched a film Bandhan, directed by NR Acharya. And Rita remembers wishing for a life like that of the film’s heroine Leela Chitnis — “as she had a good time in the movie,” Rita shares. Annoyed when...: Despite their quite awkward beginning, they started becoming comfortable with each other like a normal couple gradually. “He used to get angry with me for trivial things. He would throw things that were around him,” Rita reveals of her husband’s anger. But Rita, with a sweet voice always is cooperative, and shares her love and kindness to all — Madan Mani is fascinated by these qualities of his better half. “I haven’t heard anyone talking ill of her to date,” adds Madan Mani. “Yet in this long journey together, it will be a lie to tell that we only share love. There were fights and quarrels but I never violated her physically and verbally,” he reveals. Defining love: “One must understand the problems the other is facing in his/her life when someone is in love,” states Rita. “When one is hungry and comes home and if the other gives the food then that too is love,” exemplifies Madan Mani.

Photo: Naresh Shrestha/THT
Tale of an ordinary coupleGovinda Upadhayay 76 and Bhuwaneswori Upadhayay, 67 Together for: 45 years Govinda Upadhayay, retired civil servant and Bhuwaneswori Upadhayay are not famous like the other mentioned couples. Yet, love is same for all and their love story is equally interesting. A resident of Koteshwor, Govinda didn’t see his life partner until their engagement. Sad that she was about to leave her family members, Bhuwaneshwori started crying on the day of their engagement. Rather than consoling his bride-to-be Govinda scolded her. He told her that he would throw her off the bridge of Manahara River (in Bhaktapur) if she didn’t stop crying. Bhuwaneswori immediately stopped crying. Soon after their wedding they started falling in love though. Memorable moment: “It was a wonderful moment to watch movie Badal in a theatre hall in Bhaktapur. The experience can’t be expressed in words,” smiles Bhuwaneshwori. Annoyed when...: Govinda doesn’t like her talkative nature. “Sometimes she speaks too much. Rather than arguing with her I keep mum,” Govinda shares. For Bhuwaneshwori, “there is no need for a serious issue for a couple to argue on”. Defining love: “It is a strong attachment with someone,” explains Govinda. However, for Bhuwaneshwori love is selfish. “We love each other for our vested interest. After all I have to get help from him and he too has to do the same.”
#marriage #wedding #tradition #epitome of love
You May Also like: