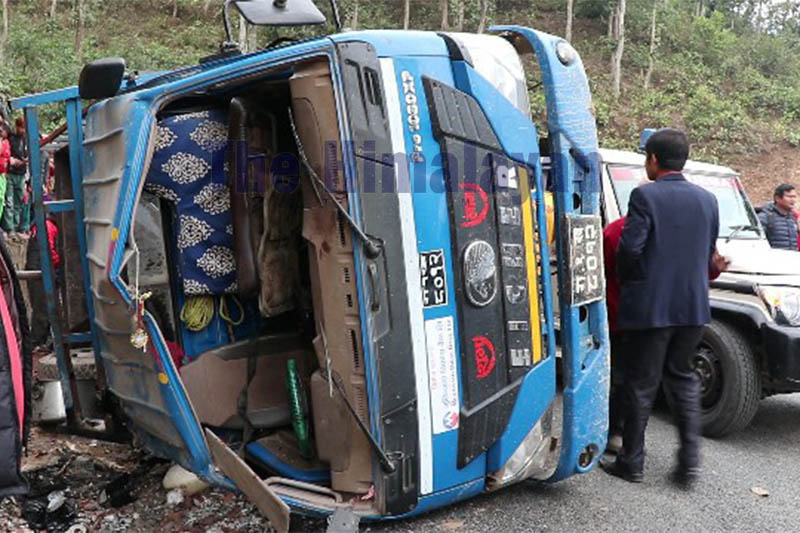 Wreckage of the mini-truck that met with an accident in Nilkantha Municipality, Dhading, on Tuesday, January 21, 2020. Photo: Keshav Adhikari/THT
The villagers were returning after offering a puja and feasting at the Dolamandali shrine in Jwalamukhi Rural Municipality of Dhading when the truck carrying them skidded on the roadside at Maidi Bhanjyang in Nilakantha Municipality-9 at about 4:00 pm due to overspeeding. Locals throng the shrine for puja every Tuesday, the only day of the week when puja can be offered to the goddess. “While four of the deceased died on the spot, others breathed their last during treatment in Dhading District Hospital later,” said SP Regmi, adding that 11 seriously injured persons were airlifted to Kathmandu-based Trauma Centre via a Nepali Army chopper for treatment. “While 20 persons are now being treated at Dhading District Hospital, four have gone home following treatment,” said the SP. Soon after the accident, a team of security personnel and rescuers had reached the accident site, 7km away from the district headquarters Dhadingbesi, and carried out the rescue. Over 40 persons were said to be travelling in the truck.
#Dhading truck accident #Nilakantha Municipality
You May Also like: