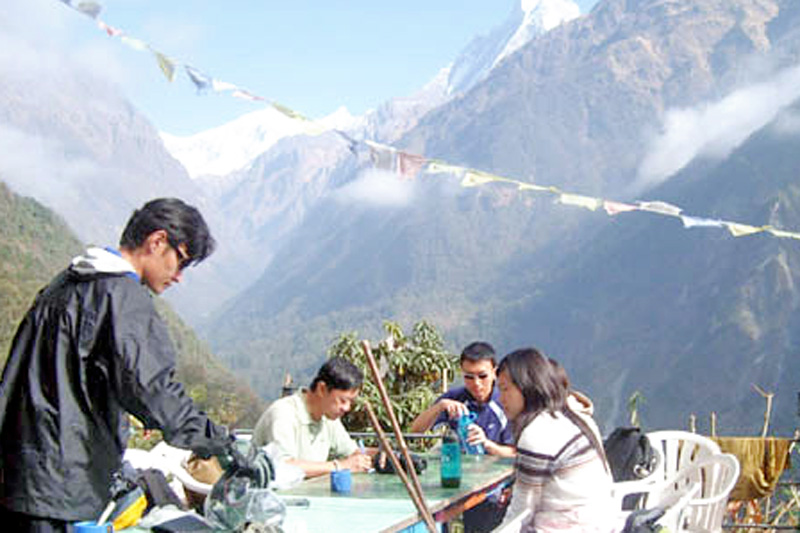 File photo shows tourism entrepreneurs having a meal on the way to Annapurna Base Camp. Photo: THT

The Hotel Entrepreneurs’ Association’s decision to increase the cost of accommodation and to introduce advance booking system along the Annapurna Base Camp route has drawn flak from stakeholders in Kaski of late.

Local Tourism Management Sub-committee Chhomrong had increased the cost of food and bed for trekkers, trekking guides, and porters along the route.

The Union of Nepal Trekking, Travel, Rafting, Airlines workers, Trekking Agencies’ Association of Nepal, and Western Regional Association Pokhara said that the cost of the amenities had been increased unilaterally without consulting them, which was not acceptable to them.

Chairperson of the committee Indra Mani Sharma said that hotel operators had increased the rate by 10 per cent. The cost is applicable in hotels along the New Bridge, Jhinu, Kimrong Khola, Ghurjung, Chhomrong and Bhanuwa to ABC. The prices had been unchanged since 2012.

“There was no option but to increase the price to adjust with the price hike in the market for the past four years,” claimed entrepreneurs.

A meal from Chhomrong to New Bridge costs Rs 180, and it costs Rs 200 from Bhanuwa to ABC, Sharma said.

“The coupon system feels like a syndicate, which is why it should be scrapped immediately,” said UNITRAW Western Regional Chairperson Bijay KC.

TAAN Western Regional Vice-chairperson Deepak Raj Adhikari said that it was not always feasible to book tickets for accommodation. “It is not always certain that trekkers and their guides will reach the destination every morning and evening and eat the same item.

This attempt to assert greater bargaining power should be stopped,” said Adhikari.

ABC is located at an altitude of 4,130 metres and starts from Phedi of Kande, or Naya Pool of Kaski. It takes a week to trek the route. Around 20,000 tourists trek the route every year.

However, there has been a sharp fall in the number of trekkers since 2015. Only 8,951 tourists visited the camp in 2015, as per Annapurna Conservation Area Project.