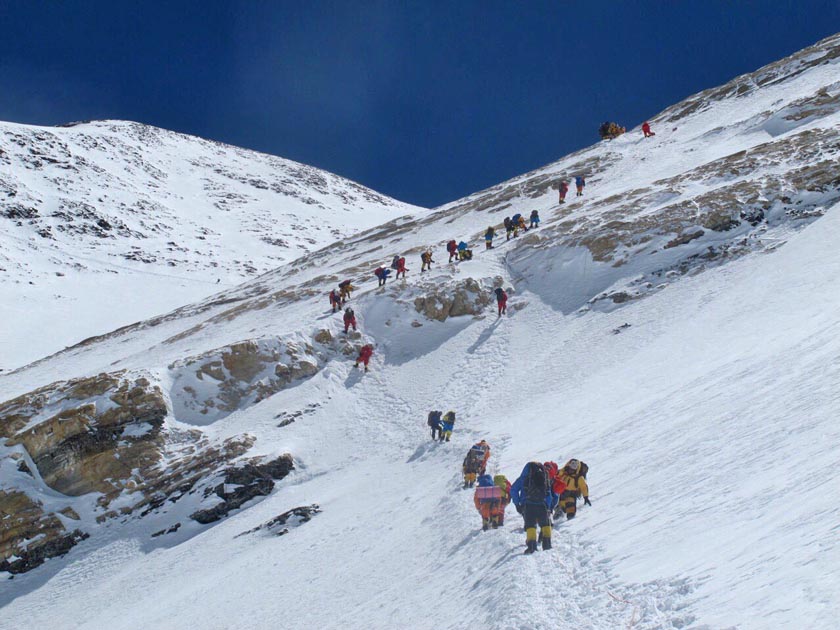 Climbers on the Mt Everest summit. Photo: Mingma Thundu Sherpa
KATHMANDU: An American climber was killed while trying to climb Mt Everest on Sunday morning, according to the base camp officials. A climber from the United States of America breathed his last while a group six climbers along with their support staff reached the balcony area to make their final summit pushes to the top of the world, a base camp manager told THT Online over phone. “The cause of the climber’s death is yet to be revealed.” Murari Sharma, Managing Director at Everest Parivar Treks said that he also got a message from the group’s base camp manager about the death of a climber near balcony on Mt Everest early this morning. “Details are yet to be known,” he said. Climbers often consider ‘balcony area’ as the death zone. According to sources, the climber was a part of a 15-member expedition handled by Dan Mazur's Summit Climb and locally managed by Everest Parivar Treks. This is the third death of climbers on Mt Everest this season. Octogenarian mountaineer Min Bahadur Sherchan died at the base camp of Mt Everest on May 6 while famed Swiss climber Ueli Steck had lost his life in an accident in the Mt Everest region on April 30.
#Mt Everest #American Mt Everest climber #Murari Sharma #Everest Parivar Treks #Dan Mazur #Summit Climb #American climber
You May Also like: