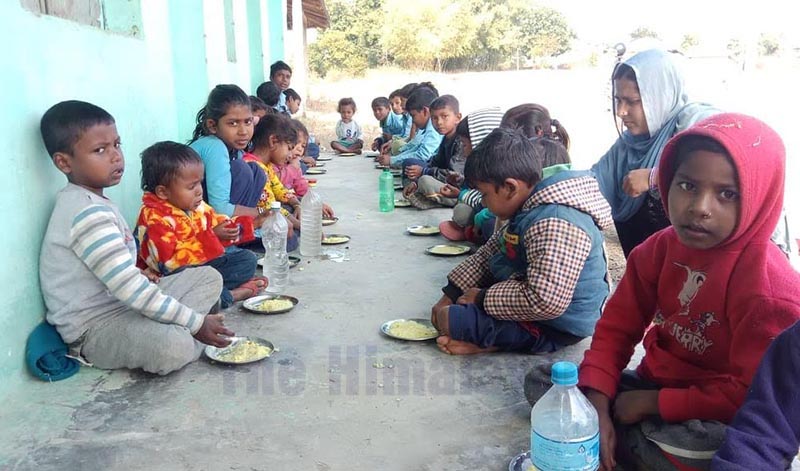 Children at Dalit Basic Level School having day meal, in Siraha, on Monday, January 20, 2020. Photo: THT
As per the attendance record, there are as many as 88 students up to grade III from Child Development Class in the school. A local guardian said around 25 to 30 students were present in the school on a daily basis. According to the school attendance record, there are as many as 27 children in Child Development Class, 26 in grade I and 19 each in grade II and III. The teachers had taken the attendance of kids who were absent when mediapersons reached the school. They said only 25 children were present in the school, but 90 per cent attendance was recorded in the attendance register. Head teacher Anauthi Mukhiya scolded a teacher Niroj Yadav after mediapersons questioned him about the matter. Mukhiya said Yadav had made a mistake. School Management Committee Chairman Tetar Ram said a few students attended the school owing to political reasons. Meanwhile, Officer at Golbazaar Education Department Jaya Ram Adhikari said the teachers might have committed such a mistake after the municipal education committee decided to release the amount of day meals as per the students’ attendance.
#Siraha #Golbazaar Municipality #Dalit Basic Level School #day meal scheme
You May Also like: