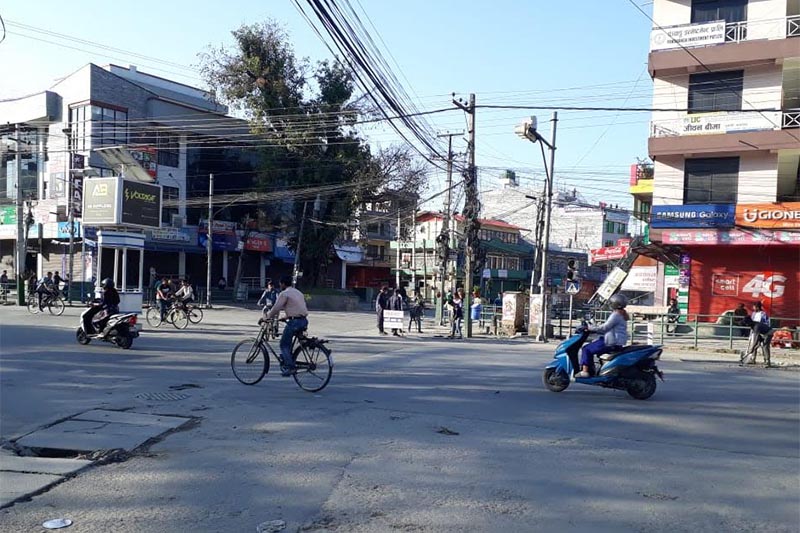 A few vehicles plying the road due to the bandh called by Netra Bikram Chand-led Communist Party of Nepal at Srijana Chowk; a bomb disposal team of the Nepali Army defusing a bomb planted at New Road, Pokhara, on Thursday, April 18, 2019. Photo: THT
Pokhara, April 18 There were reports of explosions, torching of vehicles and finding of explosive devices in different parts of the country during the Nepal bandh called by the Netra Bikram Chand-led Communist Party of Nepal today. In Pokhara, two explosive devices were found near the Pokhara Trade Mall and the Big FM in New Road. After locals informed about the explosive devices, a bomb disposal team of the Nepali Army had reached the site and defused them, said Kaski District Police Office DSP Rabindraman Gurung. Similarly, the Nepali Army also defused two other explosive devices planted by the Chand-led group near the Gandaki Provincial Assembly building in Nadipur and in Sainik Basti settlement in Pokhara. Nepali Army’s Dharma Bahadur Thapa, who was injured while defusing the explosive device in Nadipur, was sent to Kathmandu-based Chhauni Hospital. Thapa sustained major injury on his left arm.

A few vehicles plying the road due to the bandh called by Netra Bikram Chand-led Communist Party of Nepal at Srijana Chowk; a bomb disposal team of the Nepali Army defusing a bomb planted at New Road, Pokhara, on Thursday, April 18, 2019. Photo: THT
According to Tanahun District Police Office Spokesperson DSP Lilaraj Lamichhane, a Nepali Army bomb disposal team from Marsyangdi Dam site removed a pressure cooker wrapped in a red plastic bag in Rimalni of Bandipur. Elsewhere, police said an LPG cylinder was found in flames in Jhaputar of Rising Municipality. A team deployed from District Police Office had doused the fire. In Shukla Gandaki Municipality, a suspicious object kept near the municipality office was cleared from the site by security personnel. In Makawanpur, CPN cadres torched two vehicles on the eve of the bandh last night. According to District Police Office Spokesperson Inspector Sagar Bikram Rana, a group of five bandh enforcers in Bhimfedi Rural Municipality torched a mini-truck loaded with vegetables. Similarly, according to Rana, a jeep carrying poultry, which was heading to Hetauda from Palung was also torched at Simbhanjyang of Thaha Municipality. The vehicles were totally destroyed. Those involved in the arson are at large, police said. During today’s bandh, a pressure cooker bomb was found in front of the ward office of Hetauda sub-metropolis Ward No 8. Similarly, another pressure cooker bomb was found between Lewat and Bastipur of Hetauda. A team of security personnel defused the bombs. In Nawalpur, a bomb went off in the district headquarters Kawasoti during the bandh today. The explosion, though powerful, didn’t cause any casualty. A vehicle was also torched here. Locals were terrorised by suspicious objects, some of which were hoaxes meant to spread terror among people. A vehicle with Indian number plate was torched in Danda of Kawasoti today morning. According to police, acid was hurled at the vehicle and that caused the fire. Vehicular movement along the East-West Highway came to a standstill after suspicious objects were found at five different places along the highway in the morning. According to police, these objects were defused by the Nepali Army bomb disposal team. In Dhankuta too, vehicular movement along the Koshi Highway came to a grinding halt due to the general strike. A large number of travellers were also stranded on the road.
#blasts #Netra Bikram Chand-led Communist Party of Nepal #hoaxes #arson mark #Pokhara Trade Mall
You May Also like: