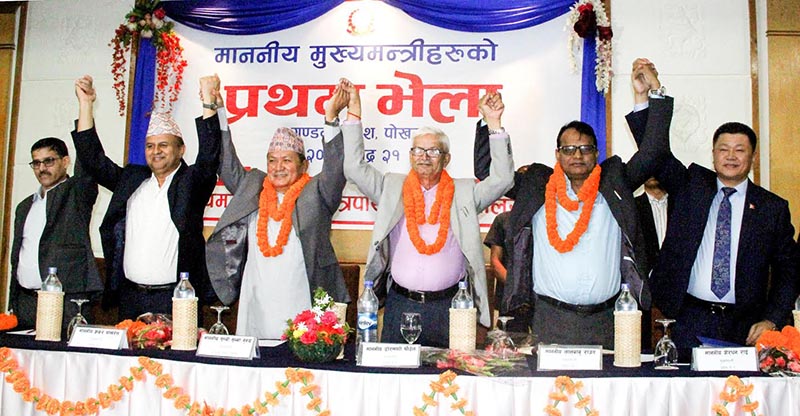 Chief ministers posing for a picture at the conclusion of a two-day conclave, in Pokhara, on Friday, September 7, 2018. Photo: THT
Pokhara, September 7 The two-day conclave of chief ministers concluded here by issuing a nine-point Pokhara declaration today and calling for a high-level political mechanism to institutionalise federalism. The conclave that started from yesterday suggested that a high-level political mechanism headed by the prime minister be formed to institutionalise federalism. Besides, the conclave has also called for setting up of a temporary secretariat of the inter-province coordination council. “The proposed secretariat of the inter-province coordination council will serve as a bridge between the provinces and the centre,” said Chief Minister Prithvi Subba Gurung of Gandaki Province. Further, the CMs also stressed on the need to formulate necessary laws for effective functioning of the provincial government. “The structures for the central and local levels are already in existence, but the provinces are new, so we need new laws, physical infrastructures, manpower and other sources for the effective functioning of the provincial government,” they observed, also asking the centre to send a senior secretaries  to work as the principal secretary of the provincial governments. “As for the manpower, the staff sent by the federal government to the provinces have yet to reach here. Even those who have been sent are on deputation or temporary basis, which obviously isn’t conducive for effective functioning of the provincial government,” said Gurung. Further, the chief ministers also sought implementation of a provision that would allow for provincial police. The conclave organised at the initiative of Gandaki Province CM Gurung had the participation of Province-1 CM Sherdhan Rai, Province-2 CM Lalbabu Raut, Province-3 CM Dormani Poudel, Province-5 CM Shankar Pokharel and Province 7 CM Trilochan Bhatta. Karnali Province CM Mahendra Bahadur Shahi didn’t attend the fathering citing health condition.
#federalism #Pokhara #chief ministers'meeting #institutionalise federalism
You May Also like: