Citizenship relief for children of citizens by birth 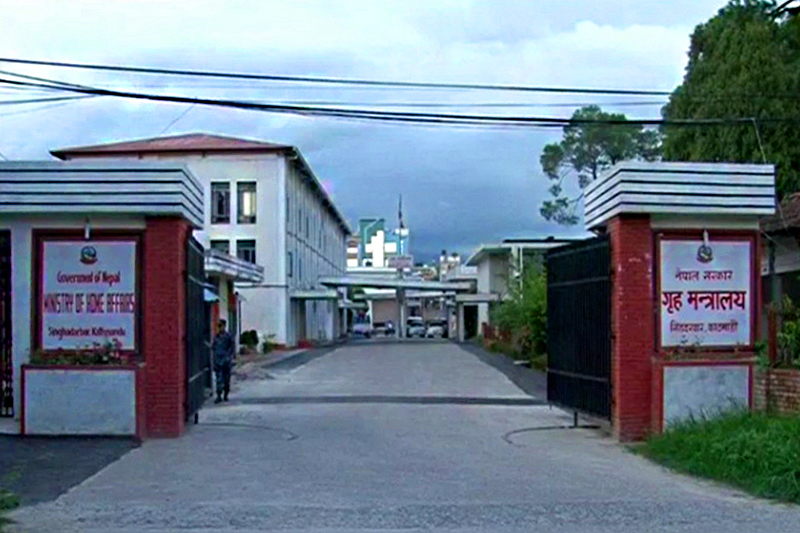 This undated image shows the premises of the Ministry of Home Affairs in Singha Durbar, Kathmandu. Photo: Google maps image
Kathmandu, April 3 The Ministry of Home Affairs has issued a circular to all 77 district administration offices to issue citizenship by descent to children of people who have acquired citizenship by birth. The ministry issued the circular yesterday as per ministerial-level decision more than three years after the constitution guaranteed the right to citizenship by descent to children of those who have acquired citizenship by birth. The constitution’s Article 11 (3) reads, “A child of a citizen having obtained the citizenship of Nepal by birth prior to the commencement of constitution shall, upon attaining adulthood, acquire the citizenship of Nepal by descent if the child’s father and mother both are citizens of Nepal.” In the circular, the ministry said it took the decision considering the constitutional provision, the fact that the bill to amend the Citizenship Act was still under discussion in the Parliament, verdicts of the Supreme Court and high courts and hardship faced by such individuals in terms of pursuing education and career development for not having citizenship. The ministry told the DAOs to issue citizenship by descent to individuals applying for the same attaching citizenship of their father and mother as per the Citizenship Act, Citizenship Rules, and Citizenship Certificate Distribution Manual. Civil rights activists welcomed the ministry’s move. Advocate Dipendra Jha welcomed the ministry’s ‘progressive decision’, but added it should have come four years ago because children of people acquiring citizenship by birth had been facing a lot of troubles, such as not being able to enrol in schools and colleges. “It is an irony that the implementation of a constitutional provision requires a circular from the home ministry,” he added. Executive Director of Forum for Women, Law and Development Sabin Shrestha said although there was no doubt that children of people acquiring citizenship by birth should be issued citizenship given all the hardships they faced, it would have been better had the government done it following the due process of making such provision in the Citizenship Act and rules. Shrestha said the ministry’s move in a way bypassed the Parliament because the bill to amend the Citizenship Act that contradicted the constitution was still under discussion in the Parliament. “On what basis the DAOs will issue the citizenship?” he wondered. “Is it that the DAOs should issue the citizenship, guaranteed by the constitution, on the basis of a ministry’s circular even as the act does not have such a provision?” Tarai Human Rights Defenders Alliance stated that the circular did not address all the concerns related to citizenship as it did not mention anything about citizenship through mother. It pressed for amendment to the act to address its concerns, adding that the government should get the amendment bill endorsed by the Parliament at the earliest.
#Ministry of Home Affairs #Citizenship #citizens by birth #Citizenship relief #citizenship by birth
You May Also like: